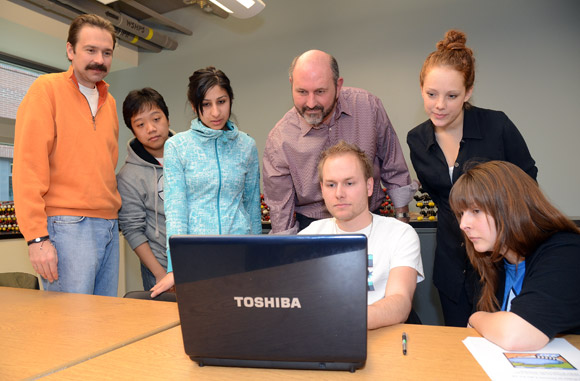 A group of students from UBC’s Okanagan campus have looked at issues from every angle, and have come up with several recommendations for the future of Osoyoos Lake, the BC body of water that straddles both the U.S. and Canada.

Professor Bernard Bauer says his Earth and Environmental Sciences class has studied the hydrology and flow problems with Osoyoos Lake and they believe a happy medium can be found to satisfy multiple users and interests.

Management of the outflow of water from Zosel Dam (in the State of Washington) has been covered under an order of approval for the past 25 years, but the agreement expires in 2013 and the Osoyoos Lake Board of Control, which is part of the International Joint Commission (IJC), is developing a new agreement. The board consists of three American and three Canadian officials.

“Of the eight studies that were commissioned and studied, most provided really good scientific input,” says Bauer. Two studies, conducted by the State of Washington Water Research Center recommend an increase in water inflow into the lake from the Canadian side to support conservation flows in the Okanogan River below Oroville, WA.

By carefully examining all of the studies and historical flow records, the students determined this was not in the best interest of the lake or the stakeholders on both sides of the border.

“It’s all one river system,” says student Adam Farr. “If you start requiring more water out of the Okanagan River on the Canadian side, it may have severe consequences for water resources management in places like Kelowna and Vernon.”

“The students examined the recommendation regarding new flow criteria and decided that there was no legal basis to make this happen, and the natural hydrology of the basin can’t actually support the flow requirements that the State of Washington has imposed on itself downstream of Zosel Dam,” says Bauer. “They (students) made recommendations to  the IJC regarding a new management plan for maintaining lake levels in Osoyoos Lake while also allowing operators (north and south of the border) to achieve multiple objectives in a more flexible manner.”

Bauer and his students entered the political side of the water issue, but all of their findings and the recommendations they have made to the IJC are based on scientific fact.