UBC research will evaluate seismic performance and retrofitting of bridges 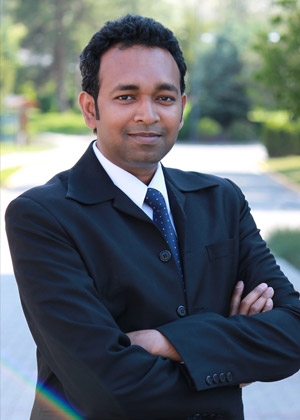 Severe earthquakes around the globe have exposed the vulnerability of public infrastructure like bridges to collapse and suffer serious damage. There are many examples:

“We are very fortunate in BC to have escaped serious infrastructure damage in the past,” says Shahria Alam, an assistant professor in the School of Engineering at UBC’s Okanagan campus.

“The West Coast of Canada is considered the most seismic-prone region in the country,” says Alam, who has been awarded a $260,000 collaborative research and development grant from the Natural Sciences and Engineering Research Council of Canada (NSERC) in collaboration with S-FRAME Software Inc. to study the issue.

To date, there has been limited research evaluating the seismic vulnerability and retrofit strategies for existing bridges in British Columbia, says Alam. The four-year study includes an inventory and evaluation of bridges. Using a proprietary software program, the research will measure structural integrity to produce “fragility curves” of bridges.

The research is expected to improve safety and security against large-magnitude earthquakes.

Alam says many BC bridges were designed with inadequate earthquake resistance features. “Therefore it is critical to assess the seismic vulnerability of existing highway bridges in BC,” he says. “It will lead Canada to sustainable solutions for bridge infrastructure and its management.”

NSERC will provide $160,000 between 2012 through 2016 for the study. S-FRAME Software Inc. is contributing $100,000 in cash and $146,000 in-kind donation for the project. The BC Ministry of Transportation and Infrastructure has supplied an inventory of bridges across BC.