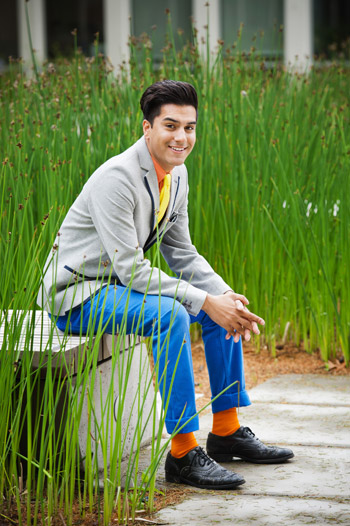 He is a talented athlete, a gifted musician, an exceptional student, an inspiring mentor, and now Liam Randhawa is the winner of the Pushor Mitchell LLP Gold Medal Leadership Prize. Established by the Kelowna law firm in 2009, the $10,000 award is given annually to a top graduating student in the Irving K. Barber School of Arts and Sciences.

Randhawa is the first member of his family to pursue a post-secondary education, and this week his efforts will pay off as he graduates with a bachelor of arts degree in sociology. He embodies all of the criteria for the award: demonstrated leadership, community service or volunteerism, intellectual pursuits, and artistic or athletic endeavours.

At 19, Randhawa travelled to South Africa to work in an HIV/AIDS orphanage in Cape Town. He struggled with how to inspire children to be the best they could be, when most would not live past 18 years of age. Ultimately, he purchased keyboards and used music as a means to instil hope and joy and improve the quality of life for children in the orphanage. Back home in Kelowna, he also set up a non-profit music program to give children from low-income families access to free weekly piano lessons. As a talented athlete, Randhawa also acted as an athletic mentor at elementary schools in his hometown of Surrey, B.C. He has also used his athletic and musical talents to fundraise for much of the work he is involved with.

“I want to say an enormous thank you to Pushor Mitchell and the Barber School,” says Randhawa. “I have been really fortunate in the last four years to be able to volunteer in Kelowna and the community at large. This was possible in part due to support and scholarships like the Pushor Mitchell Award, because I don’t have to work two jobs or think about paying back student loans.”

Randhawa is off to Harvard University this summer to complete two internships and continue studying sociology. He will conduct research on creating a resource model for children of immigrants who lack community support, and will help develop a common model for use at Women’s Resource Centres. He plans to use the Pushor Mitchell award money to pursue a law degree in the next year. His future goals also include completing a PhD in sociology.

“Ultimately, I want to be in a position to exert influence, to provide assistance and to inspire – as I this is what I believe a true leader should do,” says Randhawa. He adds that he himself benefited from the generous support and advice of his family, teachers and professors. “So many kids don’t have guidance and support. I have been really fortunate to have people in my life who have gone above and beyond, and I want to give back to my community in the same way.”

“We always tell our students to ‘get inspired,’” says Cynthia Mathieson, Dean of the Irving K. Barber School of Arts and Sciences. “Liam is one of those rare students who really uses his talents and personality to inspire others. Through his activities in our own community and in South Africa, Liam brings hope and purpose to children who may not always feel like they have a reason to be optimistic. We are proud to add him to the list of exceptional Barber School graduates who have received the Pushor Mitchell Award.”

As Randhawa heads off to Harvard, he has some advice for current UBC Okanagan campus students.

“Step out of your comfort zone when you want to be a leader. Be courageous, be inspirational. Be an advocate for people who don’t have advocates. Everyone has the power to better someone’s life. Harness the courage from within yourself to stand up for what you believe in.”

“We congratulate Liam for his outstanding achievements and his exceptional commitment to making the world a better place,” says Pushor Mitchell’s managing partner Mark Baron. “Our firm wants to support students who not only achieve academic success, but also demonstrate leadership. Liam embodies all of the qualities that we value as a firm, and it is students like him that inspired us to create the Prize at UBC’s Okanagan campus.”