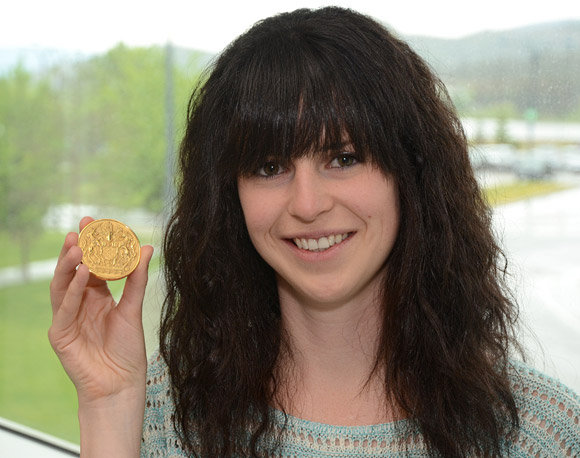 One of UBC’s most accomplished student mathematicians has won the prestigious 2012 Governor General’s Gold Academic Medal.

Julie Nutini began her master’s degree in mathematics in September 2010. The awards and accolades began when she was awarded a Graduate Entrance Scholarship. This was followed by the UBC Okanagan Scholarship, and a University of British Columbia Okanagan Fellowship. Her research with Professor Warren Hare involved developing a derivative-free optimization algorithm for functions with smooth substructure.

“I am honoured to be the recipient of the Governor General’s Gold Medal this year,” says Nutini, who is from Kelowna. “It is incredible to have my achievements and hard work recognized in such a prestigious way.”

As an undergraduate, Nutini received the President’s Entrance Scholarship, the Trek Excellence Scholarship for Continuing Students and the Canadian Federation of University Women – Kelowna Undergraduate Scholarship. She was on the Dean’s List each year as a top scholar.

Nutini began her undergraduate degree at Selkirk College, before transferring to UBC’s Okanagan campus, where she completed her bachelor of science degree in mathematics with honours.

“It is with a great deal of pride that the entire academic community offers Julie congratulations on her achievements,” says Miriam Grant, dean of the College of Graduate Studies.

“To cap her student experience at UBC’s Okanagan campus with the Governor General’s Award is a tribute to Julie’s dedication and diligent pursuit of investigative learning at the highest level,” says Grant.

Nutini’s education is not finished yet, however. She has been awarded a Postgraduate Scholarship – Doctoral from the Natural Sciences and Engineering Research Council and will begin her PhD program in Computer Sciences at UBC’s Vancouver campus starting in September 2012.

“I am excited to have the opportunity to continue on in my studies, and I am looking forward to the challenges and experiences that the next years hold form me,” Nutini says.

The Governor General’s Gold Academic Medal is awarded each year to the student at UBC’s Okanagan campus who achieves the highest academic standing at the graduate level. Since first being awarded in 1873, this medal has become one of the most prestigious awards that a student in a Canadian educational institution can receive.