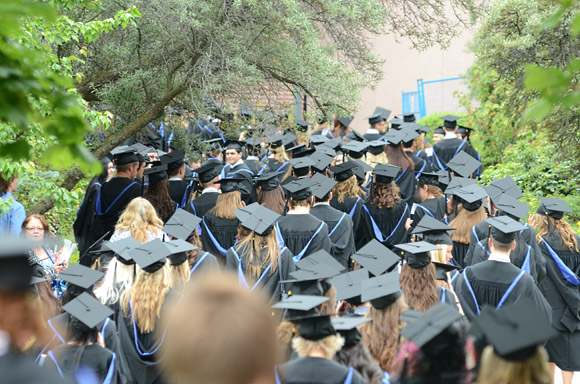 Grads line up for Convocation ceremonies at UBC’s Okanagan campus on Thursday.

Inspired by a hometown entrepreneur who made a global impact, the largest graduating class ever in Okanagan campus history received UBC degrees over four Convocation ceremonies on Thursday. 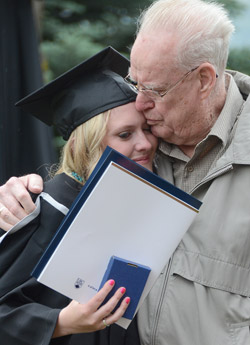 Megan Ryan gets a hug and a kiss from her grandpa Albert McClusky following her graduation ceremony Thursday at UBC’s Okanagan campus.

An honorary doctor of laws degree was conferred upon D. Ross Fitzpatrick, a retired member of the Senate of Canada and scion of a pioneering Okanagan family with deep roots in agriculture and the fruit and wine industries.

A 1958 UBC commerce and business administration graduate, Fitzpatrick enjoyed an entrepreneurial career, founding businesses in the aerospace, oil, gas and mining industries in Canada and the U.S.

In his address to students, Fitzpatrick recounted the lasting impact his educational experience made on his life and career.

“I can think of no greater honour that one can receive in their own community … to receive an honorary degree from UBC, which has become such an important part of our community.”

Fitzpatrick was among the founders of the Okanagan Partnership Society, a collection of interested regional, provincial and federal partners who saw the need for post-secondary education in the Okanagan that included engineering, management and medicine – programs that have come to fruition at UBC.

He spoke of the potential sustainable environmental and economic benefits that creation of a new national park in the Okanagan-Similkameen would bring. Fitzpatrick said it is a concept favoured by Parks Canada and the federal government, while finding no support from provincial officials.

The impasse is an example of the kind of problem that the leaders of tomorrow will find themselves grappling with, he said.

“I encourage you, the graduating class of 2012, to get involved and make your own assessments … to resolve issues like this that we face as a community.”

UBC President Prof. Stephen Toope told graduating classes that he found inspiration in the words of author Carlos Fuentes, whom he heard speak shortly before the Mexican essayist died in May.

“He was reflecting on the role of the university, and I think he said something profound,” said Toope. “He said university is the place where people learned to be freer.”

Toope said students have enjoyed increasing freedoms through their lives growing up, but Fuentes spoke of something larger than physical freedom and additional to emotional freedom. Fuentas instead spoke of the freedoms of intellect, of choice, of being spiritually free.

“I am told your time at the University of British Columbia has opened new worlds of ideas to you. I hope your teachers and classmates have challenged you so profoundly, that some of your deepest assumptions have been rocked. I hope you have been introduced to culture and world views that have caused you to question your fixed ideas,” Toope said.

“In short, I hope you are freer today … Freer of prejudice, freer of certain points of view that make other ways of thinking difficult, freer of assumptions and class analogies and raw emotions.

“As Fuentes reminds us, education contains questions that are still to come. That’s the point of a university education,” Toope concluded.

She quoted from one of Jobs’ speeches: “It’s in Apple’s DNA that technology alone is not enough. We believe it’s technology (married with liberal arts,) married with the humanities, that yields the results that make our hearts sing.”

She reminded students that the best knowledge is founded on collaboration – like Apple’s Jobs and Wozniak applying their talents together to create a global giant.

“There are many examples of this kind of marriage of differences creating innovation, because it is extremely rare for a great idea to be produced by a single great mind.”

Doug Owram, UBC’s deputy vice chancellor and principal of the Okanagan campus, told students that they have arrived at a well-deserved celebration of their accomplishments.

“Today is a milestone you will never forget,” said Owram. The ceremony of the cap and gown, the admission into rights and privileges conferred upon graduation are long-held traditions rooted in the very beginnings of formal education, he said.

“But there is a much more personal reason you will never forget today. It is a landmark in your lives, going from UBC student to UBC alumni and on to the next step.”

He told graduates they now embark upon a life that carries great responsibility.

“Use your talents and education to make a difference in the world and your career.” 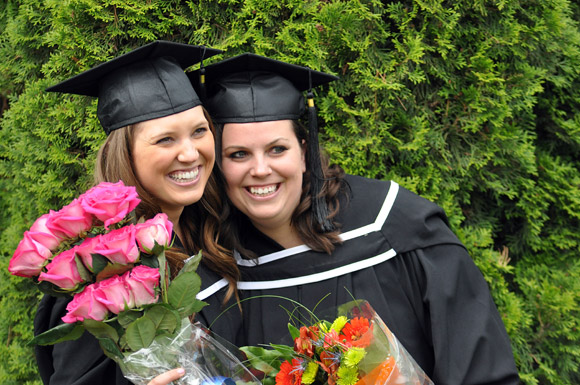 Meghan Sommerey and Kim Hackett are all smiles and flowers following their graduation ceremony at UBC on Thursday. 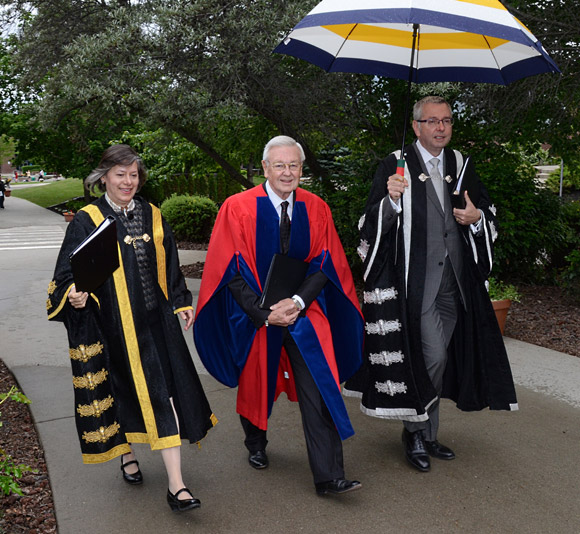