Jenna Gall advocates for the long-term sustainability of Polar Regions 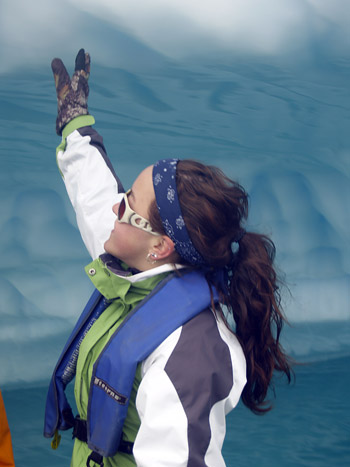 Jenna Gall, a third-year environmental science student at UBC’s Okanagan campus, touches an iceberg for the first time during a trip to Antarctica.

Jenna Gall, a third-year environmental science student at UBC’s Okanagan campus, is part of an international group of youth heading to the Rio+20 United Nations Conference on Sustainable Development (UNCSD) from June 20 to 22 in Rio de Janeiro, Brazil.

Titled the Students On Ice (SOI) Alumni Delegation, the group will lobby for sustainability in the Arctic and Antarctica through the creation of a global agreement that fairly and effectively addresses the sustainable development challenges facing the polar regions.

“SOI Delegates are united by the rare privilege of having studied and experienced first-hand these remote areas,” says Gall, who visited both the Arctic and Antarctica in 2009 on two different SOI expeditions. “Composed entirely of youth under 24 from around the world, our delegation has a unique perspective that should be communicated to decision-makers.

“We recently received full UN accreditation, which means we are official delegates and will be able to sit in on all negotiations.”

The Rio+20 Conference brings together world leaders with thousands of participants from government, the private sector, NGOs and other groups, to address two main themes:

“I am thrilled to be joining my peers from around the world to represent the youth voice at such a critical event,” says Gall. “From that first glimpse of Antarctica to the first time I saw a polar bear in the Arctic to my childhood in rural Saskatchewan, I have been dedicated to sustainable development around the globe.”

“It is vital to include the voice of youth at such negotiations as it is our future that is being discussed around the table,” says Andrew Wong, executive director of the SOI Alumni Delegation. “I am so excited to have Jenna on the team, as her passion and dedication will bring a sense of urgency to Rio+20 delegates to ensure a better future for all.”