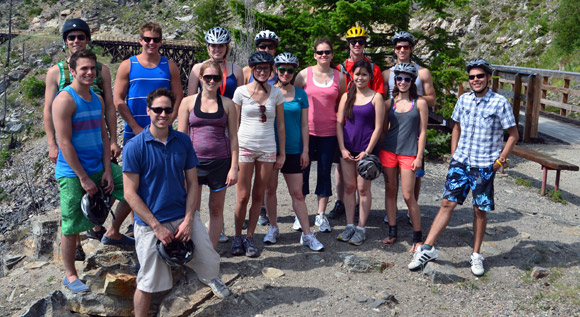 Participants in the mountain biking adventure to Myra Canyon stop for a group photo.

This year’s UBC Aboriginals Into Medicine Pre-Admissions Workshop was hosted by UBC’s Okanagan campus from July 11 to 13 .

For the first time, the annual workshop featured an outdoor adventure which took students away from a university setting and helped punctuate their three-day experience. For several hours prospective medical students enjoyed mountain biking the famous Kettle Valley Railway beds in Myra Canyon.

“The students like the campus, the city and thought the weather was nice. It’s the first time we’ve had an outside activity. But we thought it would a good chance to see the area and not be stuck in a classroom,” said Andrew. “Their reaction has been really positive. In future workshops, we may have more outdoor activities.”

Ellie Parton appreciated all aspects of the workshop. “It’s been quite busy. There were a lot of things planned for us and they’ve been valuable,” said the Campbell River resident while overlooking Southeast Kelowna. “I’m outdoorsy, so this was a great way to end it.

This spring marked the highest number of Aboriginal graduates in the history of the UBC Faculty of Medicine. Andrew believes there is a correlation between the Pre-Admissions Workshops and the number of graduating Aboriginal physicians.

“Eight of the 12 (Aboriginal) students who graduated this year attended our Pre-Admissions workshop in the past,” he said.

Workshops included how to prepare for the MCAT (Medical College Admissions Test), preparing for the multi-mini interview, an overview of the admissions process, medical curriculum orientation, small group problem-based learning and a mock Aboriginal panel interview.

“It was very helpful,” said Tarissa French of Prince George. “It provided a lot of information on the application process and dispelled a lot of the myths surrounding the MCAT.”

Helitsuk Nation member Gary Housty works as a registered nurse in the Emergency Room at Vancouver General Hospital. After being out of school for a decade, Housty found the workshops helpful.

“It was really informative. After going through the process, it’s much more manageable,” said the UBC alumni. “I was kind of intimidated about coming here. But I met some new people and it was good.”

Lauren Taylor and Travis Thompson, second and first year medical students, were on hand to answer questions and provide support.

“I believe it was beneficial to them because it cleared up a lot of the misconceptions of what it takes to be admitted,” said Thompson.

According to James, the Aboriginals Into Medicine Pre-Admissions Workshop was based on a model out of the North Dakota University and is slated to move to Prince George next year. 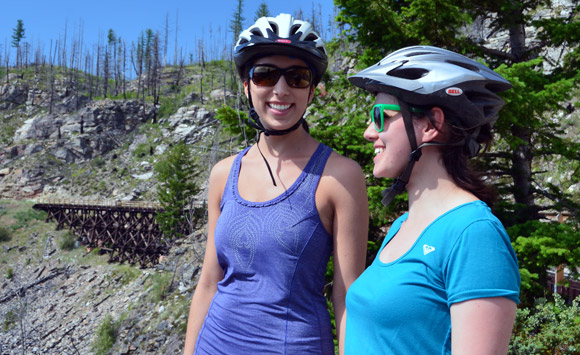