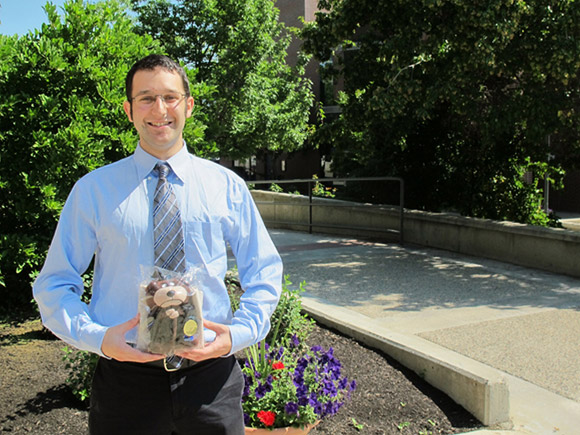 Ryan Trenholm holds his trophy bear, awarded for best oral presentation at an international showcase of almost 60 undergraduate students from 23 of the world’s leading universities in Tokyo.

A UBC sciences student – admittedly a nervous speaker – dazzled judges and took top prize for his presentation at an international showcase of almost 60 undergraduate students from 23 of the world’s leading universities.

The global Undergraduate Research Conference at Universitas 21, was held in Tokyo, Japan earlier this month.

On the heels of a top-place finish at the Multidisciplinary Undergraduate Research Conference (MURC) in Vancouver last March, Ryan Trenholm of the Irving K. Barber School of Arts and Sciences took home the Top Oral Presenter award during the second day of the conference in Tokyo.

In all, seven awards were handed out at the conference. Trenholm was one of three presenters from UBC, and the only representative of UBC’s Okanagan campus. He was also the only Canadian to win an award. His talk, Reducing Water Usage in Civic Parks Using Adaptive Irrigation, was an adaptation of his award-winning MURC presentation.

“I still can’t believe I won,” says Trenholm, from Tappen, BC, who describes himself as a nervous public speaker. “I have come away with so much more confidence in myself. My family and professors had so much faith in me, and now I feel like I can do anything. The experience really improved my life. It made me a better person, a better student and a better researcher.”

Trenholm credits the whole experience to the journey that started with his Undergraduate Research Award (URA) Project.

“My URA summer research project led to MURC, which led to the U21 Conference in Japan,” he says. “I studied Japanese in high school and getting the chance to go to Japan and represent UBC was the opportunity of a lifetime.”

Trenholm follows in the footsteps of another Barber School student, Andrew Hughes, who won the Best Presentation award at the U21 Research Conference in Melbourne, Australia in 2010. Trenholm graduated this year with a BSc in Computer Science. He will begin his master’s program at UBC’s Okanagan campus this fall, where he will work with UBC researchers and community partners to continue to investigate ways to improve water management.