Physiology presentation proves to be tops in North America competition 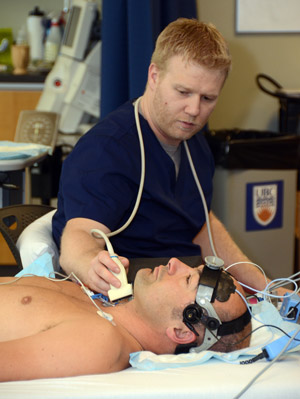 PhD student Kurt Smith conducts a procedure measuring blood flow to the brain on Gordon Binsted, dean of UBC’s Faculty of Health and Social Development. Both were members of the 2012 Everest Research Expedition. Smith won an international award, based on the research he conducted on the expedition.

A UBC graduate student has won an international award for his work in physiology. Kurt Smith, a PhD candidate in the School of Health and Exercise Sciences, won first place among more than 20 master’s, PhD and post-doctoral fellows making research presentations at a national conference at the University of Lethbridge recently.

Smith’s presentation focused on blood flow to the brain during exercise at high altitudes. Smith was among a team of 30 researchers on the UBC-led international Everest Research Expedition last May. Smith’s work was based on the experiments conducted at the EV-K2-CNR Pyramid Laboratory in the Kumbu Valley, Nepal at an elevation of 5,500 metres.

The award is based on clarity of presentation, quality of science and capability to answer questions about the research subject.

“This is a great recognition for Kurt and his research,” says Philip Ainslie, Canada Research Chair in Cerebrovascular Function in Health and Disease, associate professor in the School of Health and Exercise Sciences and Smith’s PhD supervisor. “It’s good to have some acknowledgement of his effort, being the best in North America.”

Smith, who is from Kelowna, says he’s pleased that his research struck a chord with his peers. “This is the kind of research that I hope will lead to improvements in people’s health and lives. This is an honour and I am extremely proud.”

In addition, Smith has also published some of his earlier research in the prestigious academic magazine, Respiratory Physiology and Neuro-biology.