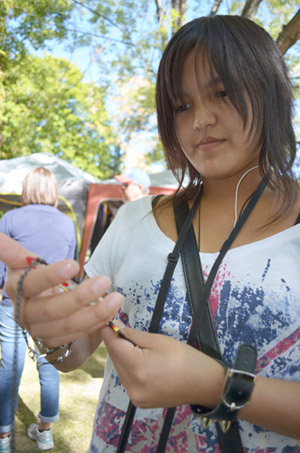 The first year UBC student, from the Dogrib (Tlicho) people, took a special interest in the craft tables at the annual event. She found the creations different than the art produced around her community of Behchoko, located on the north arm of Great Slave Lake in the Northwest Territories.

“In my culture, we use the hides of caribou or moose. This is the first time in my life I’ve seen deer hide. When you tan caribou it makes it darker than this,” said Rabesca while on the day-long tour organized by UBC Aboriginal Programs & Services. “For these weed baskets, we use birch bark instead. Here it’s different.

“But in one way it’s the same, the design of it. A lot of our work is around beading too.”

The day trip to Okanagan Falls Provincial Park included a talk by Okanagan language instructor Richard Armstrong who shared history of the Okanagan Nation and of natural monuments like Coyote Rock and Spotted Lake.

“They are as significant to us as the pyramids are to the Egyptians. A lot of our stories talk about a time when this was all lake, from here up to Vernon. They talk about this valley full of water,” said the Penticton Indian Band elder.

Armstrong went on to share how his parents shielded him from the residential school experience and how the Okanagan Valley was named.

To prepare the fish, Lower Similkameen Indian Band member Alfred Snow built a large fire the night before. After the fire burned down to a bed of coals around 3 a.m., Snow suspended the wrapped sockeye and chinook salmon above the coals, using an old box spring, and covered them with wood, then dirt.

His countryman Syed Ahmed was also impressed with the annual event. “It was very good. Awesome. I got to learn something about here, about the culture.”

A total of 70 sockeye and five Chinook were harvested from Osoyoos Lake by the Okanagan Nation for the annual event.

On the bus home, students were asked to fill out surveys about their day. Many expressed they wanted the tour to last longer, have more hands-on activities and additional interaction with the elders. 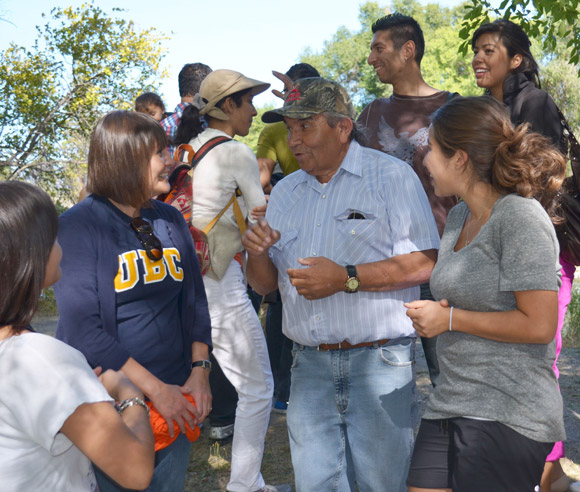