UBC’s Okanagan campus talks trash — and sorts through it too 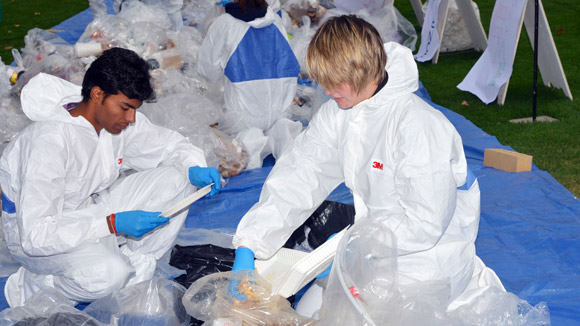 On October 2, 45 student volunteers sorted through two days worth of trash from every major building on campus as part of the 2012 waste audit.

The waste audit which was held in the courtyard assesses the amount and types of items being put in the garbage that could otherwise be recycled, refunded or composted.

The results from this year are promising. This year’s audit found that there is a drop in the amount of disposable cups (three per cent less) and paper (four per cent less) in the trash since the 2010 audit, as well as less trash overall from previous years.

The results also showed that the amount of plastics in the recycling continues to increase — up 10 per cent since 2010 — and so has the amount of compostable material due to the increase in biodegradable food containers and paper towels being composted.

This event — held every two years — helps UBC get an idea of changes in the campus community’s behaviour over time and provides insights for better waste management going forward.

The 2012 campus waste audit coincided with Okanagan College’s waste audit, showing a collective commitment to sustainability, student involvement, education, and organized efforts to divert waste from the landfill and reduce the post-secondary environmental footprint in Kelowna.

The audit is led as a collaborative project by Al King and Lindsay Eason, vice president of GreenStep, in partnership with the Okanagan Sustainability Office.