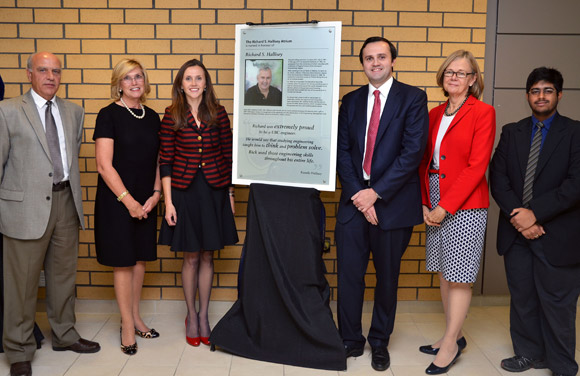 A plaque dedicating the Richard S. Hallisey atrium was unveiled Friday. Pictured are, from left: Spiro Yannacopoulos, director of the School of Engineering and acting dean of the Faculty of Management, Pamela Hallisey, wife of the late Richard Hallisey, their children Lisa Orr and Andrew Hallisey, UBC Deputy Vice Chancellor and Principal Deborah Buszard, and UBC student Suraj Raveendran.

An expansive, light-filled atrium in the University of British Columbia’s new Engineering, Management and Education building in Kelowna has been dedicated to the memory of the late Richard S. Hallisey.

Hallisey, who passed away in 2011, was a UBC-educated professional engineer who enjoyed a successful career in engineering and as a business leader. Born in Lytton, BC, he moved to Kelowna at the age of 15. He graduated from the UBC in 1963 with a Bachelor of Applied Science degree in civil and geological engineering.

After working in the oil fields of Alberta, Hallisey completed a Master of Business Administration degree from the University of Western Ontario in 1968.  He then launched his career in Canada’s financial capital on Toronto’s Bay Street, starting with Pitfield McKay Ross as an oil and gas analyst.  In 1978, he co-founded First Marathon Securities Limited, where his passion for mining and the impact it had on communities around the world allowed him to develop global mining projects and financing structures that touched the lives of thousands in Canada and abroad. 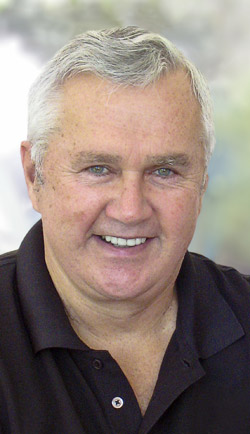 “Richard was extremely dedicated to engineering at UBC, and wore his UBC ring with great pride,” said Pamela Hallisey, who unveiled the plaque formally dedicating the atrium in her late husband’s name during a ceremony on Friday morning. The Richard S. Hallisey Atrium is a mezzanine-level space connecting the building’s north and south towers.

The Hallisey family made a private donation to the Okanagan campus’s Start an Evolution campaign, which aims to raise $100 million for student scholarships and bursaries, new facilities and research programs, and to double the number of alumni involved annually in the life of the university by 2015.

“It is particularly fitting that Richard’s academic preparation for success in life blended engineering and business education,” said Spiro Yannacopoulos, director of the School of Engineering and acting Dean of the Faculty of Management. “This building is home to Engineering in the south tower and Management in the north tower– as well as the Faculty of Education and College of Graduate Studies, and we are very grateful to the family for their support.”

“Future generations of students — tomorrow’s engineers, business leaders, educators and so many others — will benefit from the generosity of the Hallisey family,” said Buszard. “They will take their UBC experiences out into the world to accomplish great things and contribute to their communities in so many ways.

“We are honoured that the Hallisey family has chosen our campus, and in particular such an important space on our campus, to serve as a permanent commemoration of a man who gave so much to his family, his profession, and his community.”