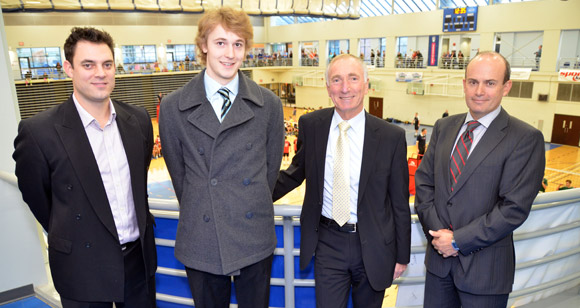 For the second consecutive year, a student athlete in the School of Engineering at UBC’s Okanagan campus is the recipient of the Capri Insurance Athletics Entrance Scholarship.

Jim Bell, a first-year student and volleyball player, is the fourth recipient of the $2,500 annual award. The award is renewable for four years and funded by an endowment established by Capri Insurance in 2009 to help top scholars, who are also top athletes, attend UBC’s Okanagan campus.

“It is quite an honour to be singled out for this award,” says Bell. “All of the student athletes at this level have put in the same time and effort to get here. It is a great feeling to be recognized for all of the effort put into academics and athletics. It encourages me to continue to push harder in the future.”

“The intent of the Capri Scholarship is for UBCO to attract and retain the very best student athletes and this year’s recipient, Jim Bell, is a fine example,” says Robin Durrant, senior partner, Capri Insurance Services Ltd. “There is a strong correlation between elite athletes and the qualities we expect of our future leaders.”

Bell is a 6’6” middle blocker who came to UBC from Earl Marriott Secondary School in Surrey, BC. Before stepping onto a court for the Heat, he established himself as a top volleyball player nationally. Bell played on the under-19 BC Team and represented his province at the National Team Cup. His play earned a spot on the Canadian men’s national junior volleyball team, where he spent the summer training and competing for Canada.

“My drive and ambition in sport helps me push myself in the classroom as well,” says Bell, adding he wants to transfer the skills and lessons learned from athletics to engineering and vice-versa. “Pursuing a degree in Applied Sciences while playing a varsity sport is good experience — it will force me to manage time and will encourage me to focus more specifically on the individual aspects of each pursuit.”

Bell and his coach Greg Poitras see a direct link between success on the court and in the classroom, and are confident the Capri Insurance Athletics Entrance Scholarship will aid the development of top athletes in Canada while producing well-rounded graduates.

“A student-athlete has to be extremely dedicated and committed to be a high achiever on the court and in the classroom,” explains Poitras. “Student athletes like Jim do not have enough hours in a day for anything other than school, work and training for volleyball. The award by Capri Insurances allows the student-athlete to maintain the delicate balance between high level academics and athletics and the out-of-classroom and off-court training to succeed in these areas.

“It also helps our program attract top student athletes from around the country who have a lot to offer the community and will become leaders of the future.”

Last year’s recipient, Julian Asselstine, enjoyed a solid freshman season for the men’s basketball team, where he worked hard to earn playing time with the men’s basketball squad; his efforts in the classroom were outstanding as the applied science student earned an Academic All-Canadian in his first year.