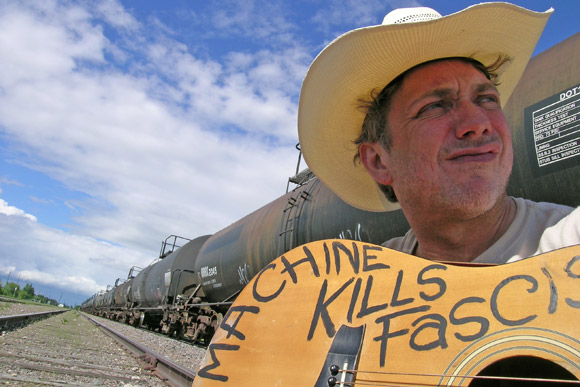 Thomas Jones wrote and performs the music and life of troubadour Woody Guthrie in the play Woody Sed. Performances are Friday, Jan. 25, and Saturday, Jan. 26, at University Theatre 26.

What: Woody Sed: A Play About the Life and Music of Woody Guthrie
Who: Written and performed by Thomas Jones
When: January 25 and 26, 2013, 8 p.m.
Where: University Theatre, Administration Building, UBC’s Okanagan campus
Tickets: $20 regular, $10 students

Woody Sed is a new one-man play about the life and times of American folk-music pioneer Woody Guthrie and the songs he sang about.

Presented by Two Dollar Shoes and UBC’s Theatre 26, and created and performed Thomas Jones, Woody Sed highlights 19 songs, both well-known and obscure, each framed in a theatrical context. The 90-minute memory play features a cavalcade of true-to-life characters — 25 personalities in all — performed entirely by Jones.

“This play was born out of the sheer astonishment I experienced learning about Woody’s life and the relevance I saw in his work and his story to the world we live in today,” says Jones, a UBC graduate.

Guthrie was a prolific and provocative writer, the father of the 1960s folk revival and, according to Billy Bragg, the first “alternative” musician. Though best known for “This Land Is Your Land,” Guthrie’s combination of working-class principles, anti-fascism, and creative prolificacy has strongly influenced music legends from Bob Dylan to Bruce Springsteen and Joe Strummer.

“Woody Guthrie saw it and wrote about it — from the dust bowl of Oklahoma to the towers of New York City and from Hobo Jungles to the Merchant Marine,” Jones says.

“Woody Sed takes you there, charting Guthrie’s rise to fame and his struggle to escape a harsh and predestined fate. Gleaned from Guthrie’s own writing, it is both the biography of a seminal American musician and an epic drama of Greek proportions.”

The play gives context to his songs, including “Do Re Mi” and “Bound for Glory” as well as Leadbelly’s “Goodnight Irene” and Wilco’s “California Stars” based on lyrics by Guthrie — nicknamed the “Dust Bowl Troubadour.”

“Nothing brings people together like music,” Jones says, “and Woody wrote songs about his turbulent times that speak to us today.”

“Woody saw it all and told these stories through his music. That was his great gift, and that’s why his songs live on.”

Jones — who has a Bachelor of Fine Arts degree from UBC — has performed in more than 60 productions and toured throughout the U.S. and Canada, with stops in Australia, Europe and Ireland.

As well as a creator, collaborator and performer, with more than 30 original productions to his credit, Jones has worked as a coordinator, stage manager, house manager and technician on dozens of festivals.

Born in Middletown, Connecticut, he moved at age 11 from Philadelphia to Vancouver, where he has been based ever since.