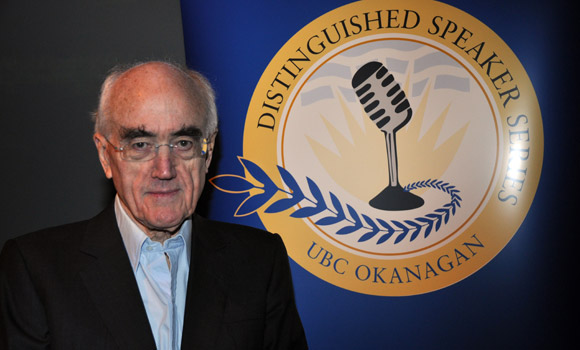 A 21st century technology revolution will change the global culture from focusing on scarcity to dealing with abundance, thanks in large part to nano-technology, says world-renowned producer, director, and thinker James Burke, who spoke to a full house Tuesday night at the Kelowna Community Theatre.

The talk was presented by the Irving K. Barber School of Arts and Sciences and was the third in this season’s UBC Distinguished Speaker Series.

In his presentation, Burke explored the intriguing possibility that the future is no longer what it used to be, and society as a whole is almost entirely unprepared. Drawing connections from medieval history, philosopher Rene Descartes, and global connectivity, to the lack of interdisciplinary studies in education, the creation of toilet paper, household nanotech labs, and the future role of universities, Burke shared his vision and ideas of what the next 60 years might bring.

“All of our values, ethics, standards and beliefs, and behaviour patterns are, if you think about it, based on scarcity,” said Burke. “Property is private, PhDs are hard to get, diamonds are expensive, and genius is rare. Today we live with institutions established in the past with the technology of the past to solve the problems of scarcity of the past.”

But this will change when scarcity itself becomes a thing of the past.

Burke notes the next big thing being explored in nano-technology is what’s called a personal nano-factory, which would essentially let any person on the planet assemble and process things at the molecular level to produce whatever they want:  fresh water, clothing, a car, gold, lunch, medication, a bottle of chardonnay, the Mona Lisa; whatever.

“If it’s atoms and molecules — and what isn’t — you’ll be able to make it,” he said. “I’m not making a case for how soon this will happen; that it will come does not seem to be in doubt.”

As for the role universities will play over the next century, Burke asserts society should expect drastic change.

“By 2060, half of today’s universities will be out of business … campuses will be replaced by virtual online sites, where you learn in something like a chat room — no big deal for young people born into a world of Twitter and Facebook,” he said. “Later on, you’ll be able to wear contact lenses, already being developed today, which will put you in a virtual classroom with all the other students, each one, like you, an avatar.

“Classes will be given by avatar professors, few in number, and world-wide academic stars, with their course enrolments in the hundreds of thousands. Grading will be no problem — it will be crowd sourced, done by your fellow student peers.”

Burke also predicts there will be a few online mega universities that will set the global standards. Online courses will be flexible with no time constraints and students will mix and match between universities to get the teachers they want. Scientific research will almost be totally done in partnership with industry and business.

“Higher education will be global, instant, interdisciplinary, lifelong, location and time independent, cheap and accessible to all, extraordinarily diverse in terms of subjects offered and, above all, closely involved online in the daily lives of most of their liberal community, their province their nation and their world,” he said.

Burke has been called “One of the most intriguing minds in the Western world” (Washington Post). His audience is global. In 1965 James Burke began work with BBC-TV on Tomorrow’s World and went on to become the BBC’s chief reporter on the Apollo Moon missions. For more than 40 years he has produced, directed, written and presented award-winning television series on the BBC, PBS, Discovery Channel and The Learning Channel.