The Tragicomic Destiny of Tubby and Nottubby takes to stage Feb. 7 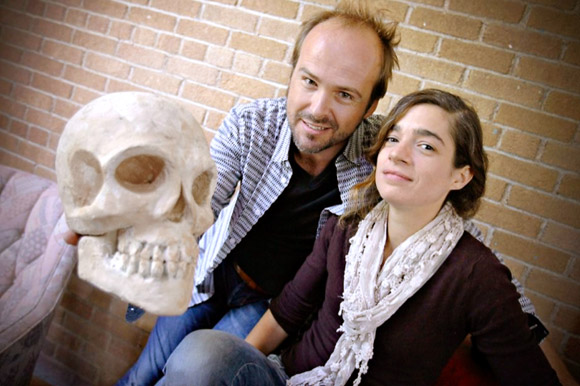 What: The Tragicomic Destiny of Tubby and Nottubby
Who: Written, directed, and Performed by Sophie Brech and Louis Fortier, Theatre Fools and Feathers
When: 8 p.m., Thursday February 7
Where:  Rotary Centre for the Arts, 421 Cawston Ave., Kelowna
Tickets: $10 to $25

Tubby and Nottubby are two larger-than-life characters encountered on the threshold of despair when destiny surprises them on Christmas Eve.

Propelling them on an extraordinary quest from the banks of the River Thames in London to beyond the realms of reality, the story explores both the tragic and comic dimensions of human experience.

We follow Tubby and Nottubby, at once deceived by their illusions and carried by the beauty of their dreams on life’s  adventure. They meet a skull, survive a tempest, fall out and make up, sing to deceive fear and death itself, en route to their renaissance. Haunted by the breath of Shakespeare, bathed in the wonderful madness of Chaplin, Laurel and Hardy, nourished by ancient myths, this show tells of the force but also the fragility of friendship, love and dreams – the ultimate defence against the cruelty of the world.

Created for the 2009 theatre season in France, The Tragi-comic destiny of Tubby and Nottubby has recently been invited by the Canadian Arts Council to participate in a tour of 35 performances across the country, to be followed by a tour in and around Paris.

The production has been favourably reviewed.

“Occasionally, theatre brings us moments of pure grace. Moments, where the magic operates with subtlety and depth without sacrificing any of the tragic elements.  Tubby and Nottubby by Fools and Feathers is one of these moments …” says Le Devoir Culture.

Presented by UBC’s Faculty of Creative and Critical Studies, The Tragi-comic destiny of Tubby and Nottubby takes to the stage Thursday, February 7, at 8 p.m. at the Rotary Centre for the Arts, 421 Cawston Ave., Kelowna.