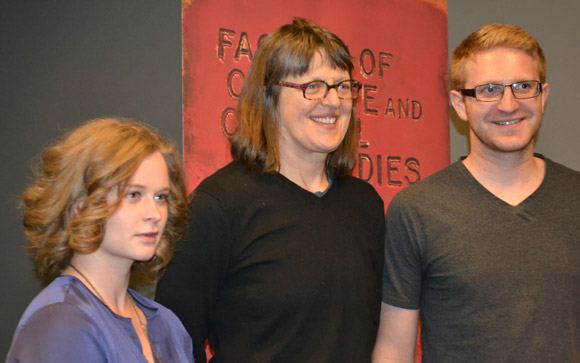 Stringing words together to create a powerful story is what Joe Dermo likes to do. He also hopes to make it a career one day. So the third-year UBC Okanagan campus student, who majors in creative writing, is thrilled to be named winner of the 15th annual Okanagan Short Story Contest.

More than 160 stories were submitted for the annual competition, organized by the Faculty of Creative and Critical Studies. Erín Mouré, award-winning Canadian poet and essayist, announced Dermo’s win at a public reading at the Okanagan Regional Library. Mouré is the sixth annual Writer in Residence at UBC’s Okanagan campus. All writers in the Southern Interior of British Columbia — east of Hope, west of the Alberta border, north of the U.S. border, and south of William’s Lake — were invited to enter their original, unpublished works of fiction.

“It’s about a man’s jaded outlook on the trivialities of sex and romance,” explains Dermo. “He’s aware of the unattainable expectations formed around love that we as a society have created, and is thus a passive and disinterested figure in his own sex life.”

Dermo, who was at the public reading, calls the win a major step for his career goals.

“It was overwhelming to hear my name in first place,” he says. “I came to Kelowna three years ago with the goal of learning from the vibrant writing community in the Okanagan. Winning this contest doesn’t just reflect on me, but also on the professors and classmates who have trained me and helped me along the way.”

The popular writing contest is sponsored by the Faculty of Creative and Critical Studies at UBC’s Okanagan campus, the Kelowna Capital News, and the Central Okanagan Foundation.