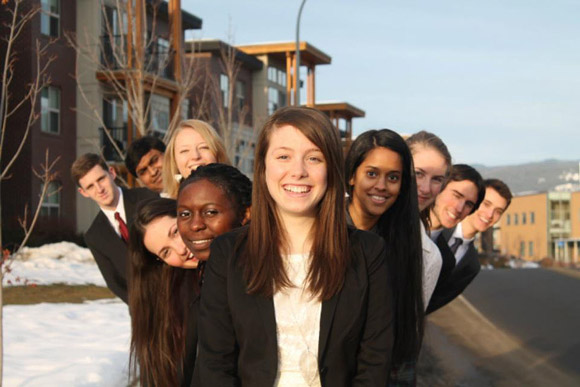 While they are students today, they may well be the leaders of tomorrow.

“The goal is to educate participants about current events and diplomacy, unite like-minded students from around the world, debate practical policies, and form tangible resolutions to ameliorate our world’s greatest challenges,” he explains.

The first took place in Vancouver in January where 11 UBC students represented India, Germany, and the United Kingdom. Krupa was the UBC Okanagan head delegate at the second conference in Boston, which took place February 14 to 17. There were more than 3,000 other students from around the world at that event and they participated in committees representing some 40 different countries.

“Our 10-member delegation represented the Republic of Cape Verde, a small African island nation,” says Krupa. “We actively debated and drafted working papers and resolutions on topics ranging from targeted killings and enforced detainment, sexual violence in areas of armed conflict, and pre-emptive war. It was thrilling to compete against and cooperate with some of the best Model UN teams in the world from the University of Chicago, the University of Pennsylvania, and Yale University. ”

The University of British Columbia’s Vancouver campus represented Uzbekistan at the Harvard conference.

“Model UN forums around the world train the brightest diplomatic students from our generation who will someday be tasked with forming multilateral strategies to address these issues on the actual stage,” says Krupa. “We are leaders who plan to someday serve this community, province, and country.”

The final Model UN conference this academic year takes place in New York City next month where Oliver Eberle, third-year Arts, International Relations student will be head delegate. At the March event, eight UBC Okanagan students will represent the Federal Republic of Somalia. The conference will be held at the official United Nations Headquarters and Eberle is thrilled to be attending.

“We couldn’t be any more excited for the authentic United Nations experience in the real UN Headquarters,” he says. “United Nations Secretary-General Ban Ki-moon is the keynote speaker.”

The UBCO Model UN Club is actively campaigning to raise awareness of the UN’s current focus in conflicted regions such as Mali and Syria, as well as raise funds and attract sponsors to cover travel expenses. Learn more at www.ubcomun.com or contact mun.ubco@gmail.com.