Field of study examines complex relationships between plants and soils 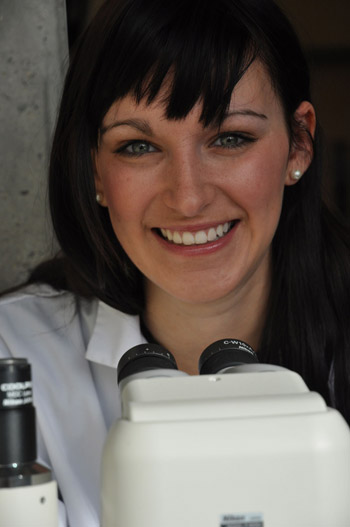 Jennifer Forsythe laughs when she has to explain, once again, how to pronounce her field of study.

“I’m used to it,” she says with a smile. “My dad jokes because I’ve been studying mycorrhiza for three years and he still can’t pronounce it.”

Simply stated mycorrhiza (pronounced my-kor-eye-za) is the study of a relationship between a soil fungus and the roots of the plant it grows on. Mycorrhiza is described as one of the oldest known symbioses on earth.

Essentially, the plant gives the fungus carbon, which in turn transfers inorganic nutrients from the soil back to the plant. This gives the plant many competitive advantages, including pathogen protection and drought tolerance. Forsythe explains that mycorrhiza can also have an impact on plant health, and can affect the diversity and productivity of the entire plant community.

“Monitoring mycorrhizae helps to keep plant communities functioning well,” she adds. “It is also a good way to reduce chemical fertilizers since it’s the natural way for plants to access limiting nutrients that can affect growth. For example, mycorrhizae can improve the quality of the food that is being produced as it helps plants absorb more minerals like iron, zinc and magnesium.”

Forsythe, a master of science student in Biology at UBC’s Okanagan campus, knows her stuff. While she spends much of her time peering into a microscope, in January she travelled to India to participate in the Seventh International Conference of Mycorrhiza. There, she presented her research to an audience of experts in the field and won the top student prize for her work.

At the conference Forsythe’s presentation entitled A Field Study of Specificity in the Arbuscular Mycorrhizal Symbiosis won the prestigious John L. Harley Medal for excellence. The John L. Harley Medal is awarded at each International Conference on Mycorrhiza to the graduate student who presents research that emulates the rigorous approaches to mycorrhizal research that Harley pioneered. It is the most prestigious award for a student to win at the conference.

“It was a great opportunity to showcase my research,” explains Forsythe. “It was my very first oral presentation and I had to do it in front of a large audience. You know there are judges in the audience, but you don’t know who they are, or where they are. It’s pretty nerve racking.”

Her goal going into the conference was to make her presentation different from the hundreds of PhD students she would be competing against.

“I made a list in my head of all the talks I had had seen and why I enjoyed them. They all had a common theme in that they told a story. That’s why they stood out. I wanted to make sure my presentation told the story of what I was studying, why I was studying it, and why it’s important.”

Her storytelling method worked. After her presentation one of the judges sought her out in the crowd to express his delight in her work. That gave her a hint, despite the fact that she was competing against a large group of mostly PhD students that she did well. With the first-place finish, Forsythe won a small cash prize, the medal, a certificate, and, most importantly to Forsythe, international recognition from the scientific community.

“Jennifer should be very proud,” says her research supervisor Prof. John Klironomos. “There were more than 100 students making oral presentations at the conference and the calibre of the presentations was very high.”

Klironomos and UBC Okanagan Prof. Melanie Jones, current president of the International Mycorrhiza Society, were also at the conference in India. The Okanagan campus has four research labs, all in the Irving K. Barber School of Arts and Sciences, which work on different aspects of mycorrhizae. This is the highest concentration of researchers on this topic at any university in the world, adds Klironomos.

Considering the conference meets only every three years and the top scientists in the field are among the judges, it really was a feather in Forsythe’s cap. As a graduate student she will defend her research this summer, and the win in India has given her a boost in confidence.

“To me, the real reward was to know that the most prominent researchers in the field are talking about my presentation and I am getting feedback from them. That’s the best reward imaginable. To have my research well received by people who are much more knowledgeable than me in the field … it was a truly great experience.”