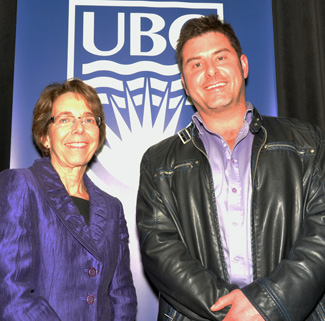 UBC Researchers of the Year Joan Bottorff and Stephen Porter

Since UBC’s Okanagan campus has grown faculty expertise in so many areas, there was no easy winner this year for the annual Award for Excellence in Research. So the honour is being shared in 2013 by nursing Prof. Joan Bottorff and psychology Prof. Stephen Porter.

Both were honoured at a gala ceremony and reception at UBC’s Okanagan campus on Friday, March 8.

As a nursing professor and director of the Institute for Healthy Living and Chronic Disease Prevention, Bottorff has led research programs in nurse-patient relationships, cancer control, and health promotion. As a mentor and researcher, Bottorff is a co-applicant and faculty supervisor on seven research grants that total more than $12 million including the 2012 Canadian Cancer Society Research Institute award for $928,000.

Along with many rewards, her research has been acknowledged nationally and internationally. She was recently inducted into the American Academy of Nursing as a fellow, a rare honour for a Canadian nurse academic to receive, says School of Nursing Associate Professor Carole Robinson.

Popular in the classroom and a sought-after graduate student supervisor, Bottorff’s prolific research has won accolades for UBC, and continues to turn heads.

“We often don’t pay a lot of attention to gender influences on health and just assume that ‘one size fits all’ when it comes to supporting healthy lifestyles,” Bottorff says. “The research we have underway is part of a growing number of research programs that are building a strong scientific base for saying that gender not only matters, but is an essential ingredient in developing programs that lead to better health outcomes for not only women and girls, but also men and boys.”

Bottorff constantly creates research opportunities for undergraduate students within the Institute for Healthy Living and Chronic Disease Prevention, adds Robinson. She has supervised more than 60 graduate students and been the principal supervisor for 10 post-doctoral fellows.

“I work with a group of amazingly talented and committed research colleagues, collaborators, and students that have made this work possible and incredibly exciting to be involved in,” says Bottorff.  “While I am deeply honoured to receive this award, it really is a reflection of our collaborative achievements.”

Porter has also earned accolades for research and work in the classroom. From outstanding teaching ratings, earning a place on the Okanagan teaching honour roll, to his supervision of doctoral and master’s students, Porter is highly respected by peers and students alike. Along with that he has established the highly-popular specialization in forensic psychology within the psychology honours program.

The forensic psychologist has spent decades delving into the truth about people who tell lies, how we perceive sincerity, and the psychology of professional liars. Porter has helped to establish the Centre for Advancement of Psychological Science and Law (CAPSL) and he specializes in investigative psychology and has become a sought-after psychological expert for the police and courts.

Porter joined UBC in Kelowna in 2008 from Dalhousie University in Halifax, NS, and established the popular specialization in forensic psychology within the psychology honours program at UBC.

“One of the reasons why his research program is so successful is because it addresses critically important clinical, personal, cognitive, and social issues at the intersection of psychology and law,” adds nominator Paul Davies.

Davies notes that Porter has a distinguished research record with more than 100 publications and he has also won significant research grants that add up to close to $1 million.

“He seems to be everywhere (in a good way),” says Irving K Barber School of Arts and Sciences Dean Cynthia Mathieson. “In the classroom, he is a dynamic well-respected teacher. His graduate students rave about his supervision and in terms of his research profile he may very well be the Canadian expert on psychology and the law. And at the risk of being colloquial, I have to add that he is a nice guy.”

Porter, however, stresses that he wouldn’t be the success he is without a strong team of people at his side.

“I cannot express the level of gratitude I feel towards my current and past graduate and undergraduate student collaborators and friends,” he says. “I have been blessed with so many extremely talented, passionate, and hard-working young scholars who have been the foundation of my research program and a personal inspiration to me.”

Also honoured at the gala event were student winners of the Research Rodeo held during Celebrate Research Week, where undergrads and graduate students competed for prizes by delivering three-minute pitches on their research projects.

Undergraduate winners are: James Beaton for Post-Fukushima prospects for nuclear-power development in the United States, Germany and Japan; Carey Simpson for Stretching sex effects, length and angle matter … in muscle; and Sarah Smith for Association of host microbiota with host obesity, insulin resistance and Type 2 diabetes.

Graduate winners are: Robert Hermosillo for Internal models of the brain; Matt Husain for Tacit manipulations in legitimizing accountability and transparency through ‘development assistance:’ An institutional ethnography on the World Bank in Bangladesh; and David Kadish for The importance of context in artificial intelligence. 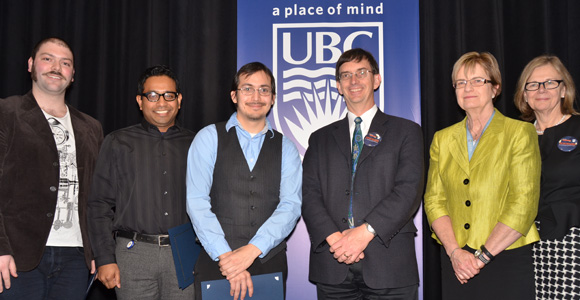