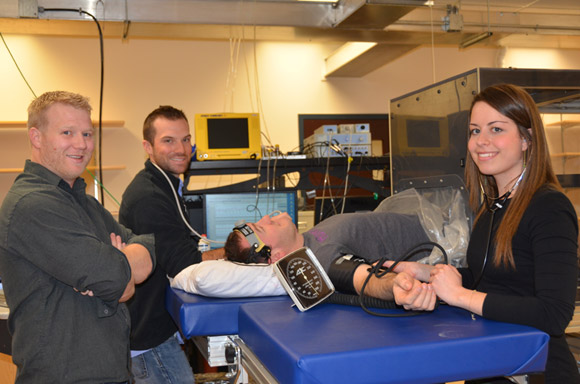 All are trainees with newly-opened Centre for Heart, Lung, and Vascular Health

While the Centre for Heart, Lung, and Vascular Health at UBC’s Okanagan campus is still fairly new, a group of graduate students are helping to put it on the map.

The Centre for Heart, Lung, and Vascular Health opened in November and is an interdisciplinary clinical research facility within the university’s Faculty of Health and Social Development. The centre is led by co-directors Phil Ainslie and Neil Eves—both associate professors with the School of Health and Exercise Sciences.

Cardiovascular, respiratory, and cerebral vascular diseases continue to be the leading cause of death and illness in Canada, with five million people living with heart or respiratory diseases or as survivors of strokes, says Eves.

The centre at UBC’s Okanagan campus was established to help researchers investigate causes, consequences, and treatments for heart, lung, and blood vessel diseases. Last month, two PhD students and one master’s student, all of whom conduct research within the centre, came away with top prizes for their work.

Jinelle Gelinas attended Heart and Lung Fest 2013 held by the Institute of Heart and Lung Health in Vancouver and was awarded first place in the cardiovascular category for her poster presentation. She is finishing her master’s degree and, under the supervision of Eves, is investigating what role exercise has on vascular structure and function in patients with chronic obstructive pulmonary disease.

At Heart and Lung Fest, Gelinas presented a poster displaying her most current research findings and also gave an oral presentation. Part of her research is to determine whether the benefits of exercise can slow down, or even reverse, cardiovascular disease in patients with a chronic lung condition.

“We are looking at the effects of exercise on vascular health in patients with chronic obstructive pulmonary disease and trying to better understand how exercise can be used as an intervention to reduced cardiovascular risk in this population,” she says.

The Heart and Lung Fest Scientific Symposium is an annual event that takes place in Vancouver each year and involves many of Canada’s top researchers and laboratories in respiratory and cardiac health, explains Eves.

“The standard of research at Lung Fest is very high,” he says. “Jinelle would have outdone other PhD and master’s students to win this award, so this is really impressive at this stage of her training.”

Meanwhile, PhD student Anthony Bain returned from the International Conference on Environmental Physiology in New Zealand last month where he won top prize for his oral presentation about how blood flow to the brain changes during heat stress. He had 15 minutes to present his research and explain to the panel of judges, comprised of internationally renowned leaders in thermal physiology, why it matters.

“When the body is heated just two degrees higher than resting temperature, blood flow to the brain is dangerously reduced,” he explains. “An increase in body temperature causes people to over breathe, which alters carbon dioxide in the blood and reduces brain blood flow. This occurs in concert with an increased heart rate and at times reduced blood volume which can further exacerbate reductions in brain blood flow.”

In North America alone there are thousands of cases each year where people collapse from heat stress and Bain says it’s important to relate these tragic events to his research.

“Before we are able to apply recommendations to the general public to prevent these occurrences, we need to understand the pathology of how they occur.”

Bain, who started his PhD in September, is studying under Ainslie, who is excited about the win in New Zealand.

“This is a major international conference that only happens every two years. It attracts the top students, researchers, and clinicians from around the world, so kudos to Anthony for winning the award.”

From high heat, to high altitude, the third winner associated with the UBC’s Okanagan Centre for Heart, Lung and Vascular Health is Kurt Smith who spent time with researchers at the Pyramid Research lab at Everest Base Camp last year. Smith, a PhD student, is studying the effects of hypoxia — oxygen deprivation —on the brain.

At high altitude the brain, much like the heart and the lungs, must adapt to the reduced oxygen, and this often increases its resting energy demand. While at Everest, Smith and fellow researchers noted how the brain, under stress, reacted at 5,000 metres altitude. Smith presented these findings at the International Hypoxia Symposium in Lake Louise in February where he won second prize, top junior student for best oral presentation.

“We were studying the effects of reduced arterial oxygen availability on brain blood flow, and the brain’s ability to maintain an adequate energy supply both at rest and during exercise,” says Smith. “The novelty of the experiment is our ability to use state of the art imaging techniques and invasive arterial jugular venous differences across the brain.”

Eves says Smith’s win proves how valuable the research is that’s going on in the Centre for Heart, Lung, and Vascular Health.

“Hypoxia is a hot topic and this is the top conference in this field,” says Eves.  “Kurt out-competed medical students, post docs, and other scientific grad students. It shows that the research we are doing here is scientifically relevant and our students are doing work of a very high standard.”