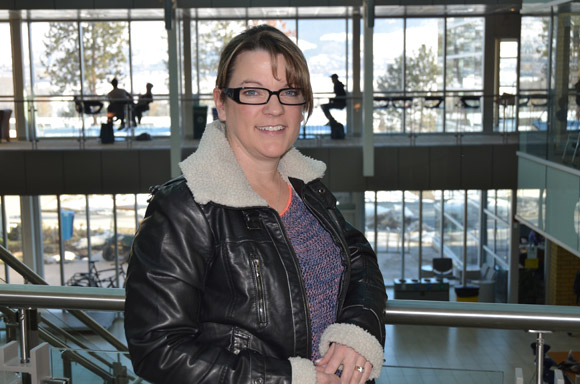 Nicola King, who is embarking on a career as a social worker, feels better prepared today to deal with a broad range of cultural and social issues than she might have before.

She credits this to the Indigenous health and cultural safety course offered through the Faculty of Health and Social Development. The course includes four learning modules that explore Aboriginal health from the perspectives of traditional Aboriginal culture, ongoing impact of colonization, cultural safety and spiritual values.

“The learning modules are specific to Aboriginal people,” says King. “However, the holistic view of an individual and the importance of understanding their story and how they interact with members of the health-care team really seem like a critical piece to appreciate and understand.”

King and other students in the course were taught by Knowledge Keepers Eric Mitchell and Chris Marchand, from the Okanagan Indian Band and Elder, Jessie Nyberg, from the Stswécemc/Xgat’teme Band. Students also met other Elders when they visited the Okanagan Indian Band community as part of the course requirement. King also learned about the influence of cultural on interactions between Aboriginal people and the healthcare system.

“I feel the modules met the requirements of the university. But they also went the vital step of providing the cultural experiences,” says King, a fourth-year Bachelor of Social Work student, currently doing her practicum at the Kelowna General Hospital.

The Aboriginal Health Curriculum Project was developed in recognition of the urgent need to address the current state of Aboriginal peoples’ health in Canada by preparing  health care professionals to provide culturally appropriate services.

The curriculum has been delivered, in full or in part, to more than 400 students in the Schools of Nursing, Health and Exercise Sciences and Social Work.

Contents of the modules include:

Donna Kurtz, an associate professor of nursing, says the learning modules are a critical component of the nursing curriculum. Students learn culturally safe methods, skills and techniques for working effectively and respectfully with Aboriginal people, families and communities.

“Nursing students have been taught the Aboriginal health modules for the last few years because we have integrated them into the nursing curriculum,” says Kurtz. Some Social Work students took the course as an elective. “We are committed to extending offering the modules throughout all three schools within the faculty.

“The curriculum was written by Aboriginal people from community, Interior Health Authority and UBC, providing Aboriginal perspectives and Aboriginal voice.  It was developed in such a way that honours the essence of Aboriginal being,” says Vinek.

Gordon Binsted, Dean of the Faculty of Health and Social Development, credits the efforts over the last four years to the Aboriginal Health Advisory Committee, which   guided the development, implementation and evaluation of the Aboriginal health modules.

“It has been our incredible good fortune to have an engaged Aboriginal community throughout the Okanagan,” says Binsted. “Band members, Elders and ‘Knowledge Keepers’ have played important roles in making Aboriginal education an integral part of our curriculum.”

For Nicola King, the Aboriginal health cultural safety education has provided her with a great personal and professional resource. “I have a lot more appreciation for how the historical treatment of Aboriginal people has contributed to some of the social and economic situations they face today.”

King says, “I feel very strongly that these courses should not be elective, but should be part of the core curriculum for anybody working in health care. They speak to Aboriginal culture and really, they are applicable to any human interaction.”

With implementation of the last of the four modules, the committee has completed its mandate. However, the relationship with the Okanagan communities involved in the project will continue through the delivery of the modules within the nursing program curriculum.

“We are extremely grateful for the contribution of the Okanagan/Syilx Nation throughout the valley and we wish to honour our Aboriginal partners for enriching post-secondary education in such meaningful ways,” says Binsted.

Funding to develop and pilot the course and the four Aboriginal Health Modules was provided by several bodies: the BC Ministry of Health (Nursing Directorate Aboriginal Nursing Strategies project) in 2008/2009; the Aboriginal Health Human Resources Initiative (AHHRI) (SWKNAQINX modules project) in 2008/2010; the Okanagan campus Office of the Provost in 2011/2012; and most recently, the Faculty of Health and Social Development.

A special celebration will be held at UBC on April 19 to thank the committee members. Over the last four years, membership has included: