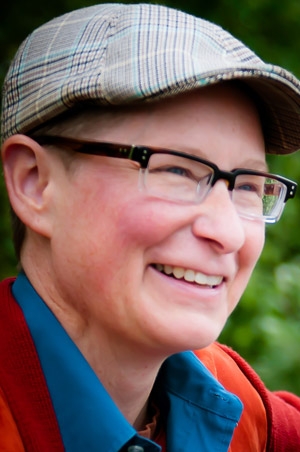 Fleming is among five finalists up for the Ethel Wilson Fiction Prize in the 2013 BC Books Prizes. The winners will be announced at the 29th Annual Lieutenant Governor’s BC Book Prizes Gala on May 4 at Government House in Victoria.

Fleming’s collection of short fiction and her third book, Gay Dwarves in America, is the short-listed volume nominated for the prize.

There are no gay dwarves in Gay Dwarves of America, but there is a mother of a teen with dwarfism who worries he might be gay, a parasitologist named Edna who longs for the love of a certain young woman, a boy on a unicycle, and a hockey mom in Toronto who pretends to be Swiss.

“We are extremely proud of Anne and her literary contributions to Canadian culture,” says Neil Cadger, head of Creative Studies in the Faculty of Creative and Critical Studies at UBC’s Okanagan campus.

“In addition to being a celebrated author, Anne is an admired member of our faculty whose teaching and depth of understanding has benefitted hundreds of young writers. We will all be rooting for Anne to win.”

Previous winners of the Ethel Wilson Fiction Prize include Carol Shields for Unless (in 2003) and Eden Robinson (2001) for Monkey Beach. Last year, the award went to Esi Edugyan for Half-Blood Blues, which was also shortlisted for the Man Booker and Giller prizes, among several others.