A light-hearted look at zombies, math, and serious disease 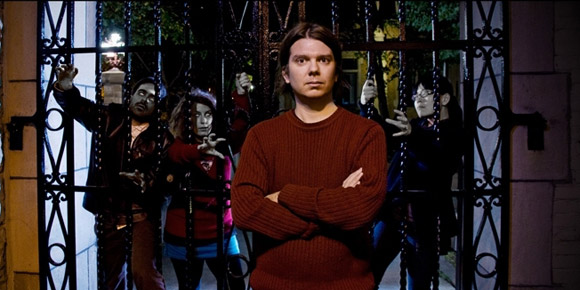 Robert Smith? and friends. It’s all about the math

University of Ottawa’s Robert Smith? provides a new way to look at math

What: a mathematics discussion about disease modelling and zombies
Who: Robert Smith?
When: Thursday, March 28, 7 p.m.
Where:  Mary Irwin Theatre, Rotary Centre for the Arts, 421 Cawston Avenue, Kelowna

Quick question — what do zombies, mathematics, and serious diseases have in common? The answer: Robert Smith? (and yes, that’s Smith with a question mark.).

Smith?, a mathematics professor at the University of Ottawa, has found a way to connect math with the research of disease in a light-hearted manner by adding some flesh-eating zombies. It’s a novel and entertaining approach to disease modelling: using fictional zombies to illustrate how real disease can be modeled with mathematics.

Originally from Australia, but now living in Canada, Smith? studied sewage treatment, toxic waste cleanup, and infectious disease to earn his PhD. He completed a post-doctoral fellowship at the University of Western Ontario, where he studied immunological modelling of HIV. While there, he applied a technique known as Impulsive Differential Equations to drug-taking to create a complex HIV model. He then used that modelling to discuss drug resistance.

His second post-doctoral fellowship was at the University of California at Los Angeles —where he was part of the Disease Modelling Group in the School of Medicine, working on epidemiological models of HIV. His next move was to University of Illinois, where he worked on zoonotic diseases, specifically malaria, Chagas disease, and West Nile Virus.

Smith? now teaches at the University of Ottawa. He’s still working on HIV, but has recently become interested in Human Papillomavirus, malaria, various tropical diseases—and, of course, zombies. Smith? says his work on zombies has grabbed quite a lot of attention and it thrills him to have academic discussions about his mathematical model and flesh-eating undead.

Join Smith?, at 7 p.m. on Thursday, March 28, when he brings his humour to the stage, along with some mathematical equations, and perhaps even a zombie at Kelowna’s Rotary Centre for the Arts, 421 Cawston Ave., Kelowna. This is a presentation of the Computer Science, Mathematics, Physics and Statistics Unit in the Irving K. Barber School of Arts and Sciences. Earlier that day, he will speak at two middle schools and UBC’s Okanagan campus.

No reservation is required for this even, admission is free and seating is open.

The UBC Bookstore will have Smith?’s book Braaaiiinnnsss: From Academics to Zombies on sale at the evening event.