Stretching — is it really good for you? 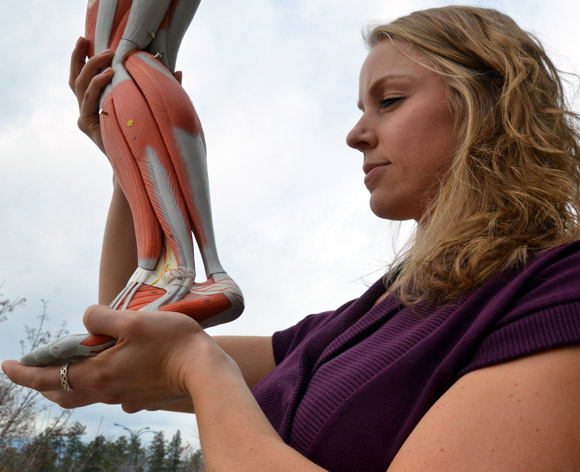 Carey Simpson inspects the Achilles tendon and calf muscle of an anatomical model.

Carey Simpson has found that not all things are equal when it comes to stretching.

The fourth-year Human Kinetics student at UBC’s Okanagan School of Health and Exercise Sciences has discovered there are significant differences in male versus female physiology when it comes to pre-exercise routines.

Simpson finished a seven-month study under Assoc. Prof. Jennifer Jakobi that investigated the effects of stretching the calf muscle and Achilles tendon. The findings showed that connective tissue in women’s legs becomes looser with stretching, while the muscles, fibres and tendons in men’s legs were unchanged.

The trouble is that looser tendons can be a precursor to injury during exercise. The slack tissues do not respond to quick movement, pivots and stretching during such activities as running, volleyball, basketball, soccer and field sports.

“Women after stretching displayed significant differences in tendon length change. In men, there was no change,” says Simpson, of Kelowna. “Now something we thought was universal appears beneficial to one sex but not the other.”

Medical literature suggests that high levels of estrogen in girls and young women can be linked to muscle and tendon tautness, says Simpson. She says much further study is required, but it may be that younger women could benefit from changing their stretching routine

However, it could be a different story as women go through stages in life, as estrogen levels decrease significantly with age.

“As a woman ages, she could benefit more from stretching. So studying the effects of life changes would be the next step for my research,” says Simpson. She hopes to conduct follow-up studies while pursuing a master’s degree after graduating.

The study on stretching was done using 10 male and 10 female recreational athletes aged 19 to 30.. Participants performed a maximum toe point, followed by a two-minute static stretch which brought their toes toward their shin, and then a final maximum toe point. Ultrasound was used to measure changes in the muscle fibres of the gastrocnemius and Achilles tendon, otherwise known as the calf muscle.

Simpson presented her findings at the Research Rodeo during the Okanagan campus’s Celebrate Research Week in March. Participants had three minutes to deliver an oral presentation and sway a judging panel and audience. One of three winners in the undergraduate category, Simpson was also named the People’s Choice Winner.

Stretching is one of the great unexplored areas of exercise sciences, says Simpson. While there are numerous valuable studies in such areas as cardiovascular and heart health, stretching has enjoyed little scientific investigation.

“It’s exciting with the techniques we’re developing in the lab right now, says Simpson’s advisor, Assoc. Prof. Jakobi. “This has never been reported in medical literature”

The significance of the findings documenting sex differences could set a new course to understand performance in men and women, and the way athletes train, prepare and perform, says Jakobi.

Simpson plans to publish her research and present an abstract at an international health sciences conference in Barcelona, Spain this summer. 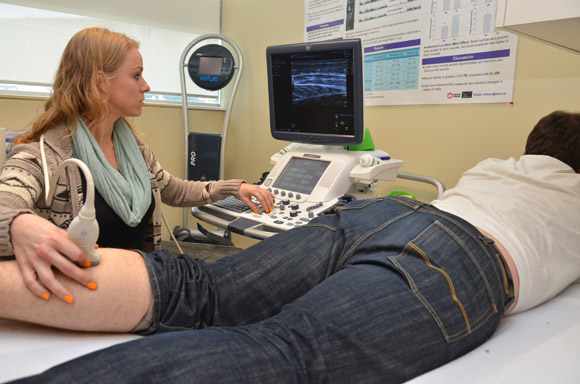 Carey Simpson conducts an ultrasound procedure on the calf of volunteer John Bocti.