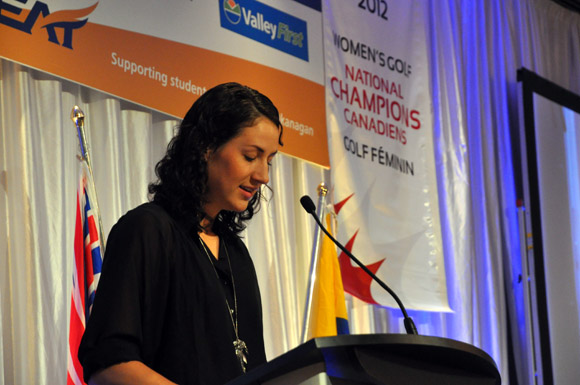 Student athletes at UBC’s Okanagan campus are grateful for the community support they get – and really could not get by without it.

“The life lessons I take away from this team will point my way forward in my future endeavours and I am humbled by this experience,” Huber told business and community supporters filling the Coast Capri Hotel’s ballroom.

Huber said student athletes are committed to both their studies and their sport which means they do not have time in their lives for part-time jobs to earn income to pay for their education.

This year’s breakfast raised $25,000 – which when matched by UBC means there is $50,000 in new athletics scholarships for UBC student athletes.

“The scholarships we receive offset our tuition and it takes one more thing off of plate in September,” Huber said.

UBC Deputy Vice-chancellor and Principal Deborah Buszard told the early-morning gathering that student athletes at UBC are renowned for their volunteer efforts in the community through activities such as the food bank’s Stuff the Bus, the Canadian Cancer Society’s Shoot for the Cure and Movember programs, the Parkinson’s Disease chapter’s Superwalk, Wendy’s Dreamlift Day and KidSport.

“As you can imagine, being a UBC student athlete requires a substantial commitment of time and effort throughout the entire academic year,” Buszard said. “We are dedicated to proving the financial support necessary to ensure students have a quality athletic and academic experience and the opportunity to focus on their academic and athletic success.”

But UBC cannot accomplish this alone, she said. Thanks to the support of generous donations, such as the $3.5-million from Barry Lapointe and Mary Jo Schnepf on behalf of the employees of Kelowna Flightcraft to build the Hangar fitness centre, UBC is able to add to its facilities for students.

Johnson spoke of the facility improvement plans for the Okanagan campus following the Hangar’s completion this spring.

“The next pieces of the facilities puzzle include an indoor field training surface and an expansion to the gymnasium – hopefully to include a sports medicine clinic, medical research, and space for local amateur sport administration,” said Johnson. “These additions to our existing facilities would make this campus a provincial or national hub for sport, sports medicine and sport science.”

The Athletics Scholarship Breakfast also featured a discussion hosted by Pat Kennedy, managing director of the Central Okanagan Sports Hall of Fame. Members of UBC’s Everest 2012 international research expedition, including lead investigator Philip Ainslie, associate professor in the School of Health and Exercise Sciences, Nia Lewis, a post-doctoral fellow, and PhD candidate Kurt Smith told of their studies at the Pyramid Laboratory in Nepal last May.

Experiments on sleep apnea and regulating blood flow to the brain and major organs were among those conducted by 25 scientists from around the globe. Most such studies take three to five years to produce results. Findings from the Everest study should be presented and published over the next 12 months, due to the quality of data and intense research by the scientific team, Ainslie said.

“We want to do the best research we can, so we draw on expertise from around the world,” Ainslie said. “It is a crucial time in biological experimentation.”

Many chronic conditions like heart failure and strokes are caused by interruption in blood flow, and experiments at high-altitude, low-oxygen environments can closely mimic those conditions, Ainslie said.

Over the past seven years, the UBC Athletics Scholarship Breakfast has raised more than $400,000, supporting an endowment to create scholarships for student athletes. 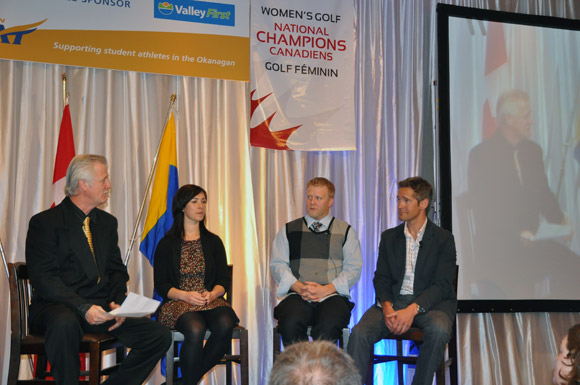