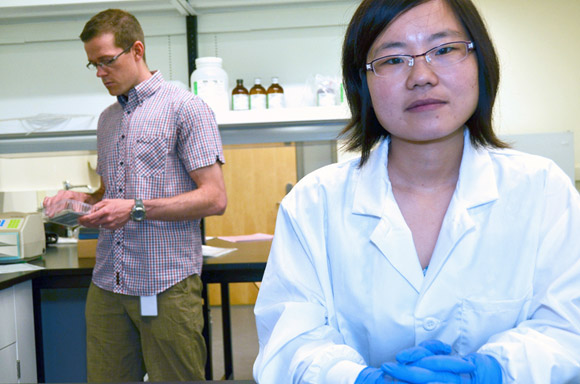 Post-doctoral fellow Caroline Wan in the lab with her faculty supervisor Jonathan Little, assistant professor in the School of Health and Exercise Sciences at UBC’s Okanagan campus. Wan has received an $80,000 award to help with her Alzheimer’s disease research.

Ultimate goal is to find a cure for the disease, which affects 200,000 BC residents

Is there a link between obesity and Alzheimer’s disease? Caroline Zhongxiao Wan, a post-doctoral fellow in the Faculty of Health and Social Development at UBC’s Okanagan campus, thinks so.

And she’s one step closer to finding an answer. Wan has received a Biomedical Post-doctoral Award from the Alzheimer Society Research Program. The fellowship comes with more than $82,000 in funding that will help continue her research to find the determining factor of Alzheimer’s.

“Obese people have about 60 per cent greater chance than non-obese people of developing Alzheimer’s disease,” Wan says. “This is becoming an increasingly important risk factor because the levels of obesity in BC and Canada continue to rise.”

Alzheimer’s disease is the leading cause of aging-related dementia in BC, where more than 200,000 people have the disease. It is characterized by excessive degeneration of neurons in the brain that lead to memory loss, cognitive impairment, and eventually loss of independence. This places an enormous burden on their families and caregivers.

Currently, there is no cure for Alzheimer’s disease, so Wan stresses there is a definite need for preventative strategies and risk reduction.

“It is important to understand the links between obesity and an increased risk of Alzheimer’s disease,” she says. “And it is only by understanding these links that we can identify and test therapeutic strategies designed to reduce the risk of this devastating illness.”

Wan’s research specifically looks at adiponectin, a naturally-occurring hormone. Historically, adiponectin has been shown to have many health benefits, but decreased levels of the hormone have been linked to the development of Type 2 diabetes and atherosclerosis.

Wan thinks there are more risks related to reduced adiponectin levels — specifically, reduced brain-cell function. Part of her research will investigate whether adiponectin can protect brain cells from neuro-degeneration.

“We hope this research will increase our understanding of how obesity increases the risk of Alzheimer’s disease, and we may identify adiponectin as a novel therapeutic target for preventing Alzheimer’s in the growing number of Canadians who are overweight or obese,” she says.

Wan’s faculty supervisor Jonathan Little, assistant professor in UBC’s School of Health and Exercise Sciences, is thrilled with her fellowship.

“We are extremely excited that Caroline has won this highly competitive award,” Little says. “She is an extremely bright and hard-working scientist, and her presence enhances the training environment for the graduate and undergraduate students in my lab and across the school.”

Wan, who has an undergraduate degree in public health and a master’s degree in nutrition and food hygiene from Peking University, China, has been studying at UBC’s Okanagan campus since January. Her doctoral studies were completed at the University of Alberta, where she focused on adipose tissue biology in the context of obesity and exercise.

Her post-doctoral fellowship at UBC will allow her to further study in these areas while she works towards her ultimate goal of finding a cure for Alzheimer’s disease.

“My career goals are to discover novel lifestyle strategies that will improve the lives of people living with the illness,” Wan says.  “And eventually I hope to uncover aspects of Alzheimer’s pathology that could be used to help find a cure.”