It’s never too late for a university education 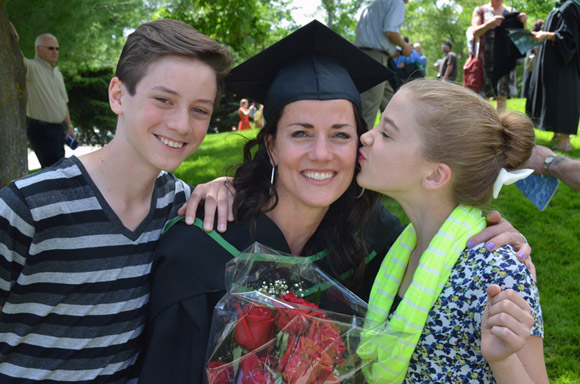 Wendi Wright is hugged by her children Diego and Diante after graduating with a Bachelor of Science degree in Human Kinetics at UBC’s Convocation on Friday.

Twenty years out of high school, Wendi Wright decided she needed a change. She was a long-time personal trainer but felt she wanted to do something more meaningful.

“I just felt I wanted a bit more out of life than that,” says Wright, from Lake Country. She delivered the student address Friday to fellow graduates in the Faculty of Health and Social Development at the final of five Convocation ceremonies held over two days at UBC’s Okanagan campus.

“I had heard about occupational therapy and all that it entailed. I wanted to expand my career in that area,” says Wright. “Plus I was raising two children and I wanted to be at home and be available for them. So I enrolled in the Human Kinetics program at UBC.”

She admits it wasn’t easy – taking plenty of grit and determination to complete her four-year degree – but Wright witnessed plenty of the same dedication in her fellow students and told them so in her speech.

“I want to encourage them to recognize we all value education and that we work very hard to create our own models of excellence,” says Wright. She saw the same life lessons, values, work ethic and respect for higher education reflected in her classmates.

“That’s something that I believe we carry on with through life in whatever areas we head into.”

Now that she has achieved her Bachelor of Science in Human Kinetics degree, Wright will pursue her master’s degree in occupational therapy at UBC’s Vancouver campus in September.

In an earlier ceremony Friday, UBC awarded an honorary doctoral degree to world-renowned photographer Ed Burtynsky, who tasked the graduating class of 2013 with a big job: Take care of our planet.

Burtynsky was presented with an honorary degree at Friday’s fourth Convocation ceremony at UBC’s Okanagan campus. His photography, which has been shown around the world, illustrates the damage that industrialized society is making to the planet.

“When I graduated from university, the most important things on my mind were having fun, finding a job, and getting a girl,” he told the graduates.

But the world is much different now, and society’s constant and unbridled need for energy is taking its toll. Graduates in today’s ceremony face the grim reality that sustainably is no longer a simple catchphrase, but something that must be accomplished.

While he spoke, large images of his award-winning photographs were displayed on large screens. They showed pockmarked mining landscapes, mills, garbage dumps filled with tires, hillsides scarred with train tracks and roads, and rivers filled with water now stained from years of industrial pollution. It is up to the next generation, he said, to find a way to solve the world’s energy problems and at the same time save the planet.

“We must cease and desist in this rapid destruction of our environment,” he said. “Think of what we have today, what we have lost, and what we might not have in the future. The choices we make today have a lot to do with the future of this planet. Please, think of yourselves as campers, temporary visitors to our beautiful planet. And do what you can to leave a clean campsite.”

UBC President Prof. Stephen Toope told students they are graduating into a complicated and perplexing world. Governments around the world are fixated on the limited notion that an educated person needs to generate skills to fuel the economy and match available jobs.

“The risk to government is that they set their sights too low,” Toope said. “The skills that we need in our fast-changing society include the ability to work effectively together in teams; to sift, analyze and evaluate the plethora of information that comes at us minute by minute; to draw creative connections between seemingly disparate phenomena.”

“Citizens voice opinions and organize their societies; they take action in the face of injustice and inequality. Educated citizens deploy their critical capacity, and empathetic judgment to become leaders of citizens. That is your potential and one that I wish our governments would more firmly embrace.”

UBC Chancellor Sarah Morgan-Silvester said graduates are entering a transition in their lives, and it takes courage to go from student to the next stage of life. There are setbacks and challenges but these too are part of the transition, she said.

She likened graduation to spring renewal as gardens come to life and warm sunny days replace the dull greyness and cold of winter.

“Change is a challenge. Even so, I do hope you will step out beyond the exposed fault line and seek the growth of your own personal spring.”

UBC Okanagan campus Deputy Vice-Chancellor and Principal Prof. Deborah Buszard reminded graduates that they are the change agents of the future.

“When you began as students of UBC, you were encouraged to make this university experience your own. Many times during your student lives, you have heard the UBC motto ‘Tuum est. It is yours, or it is up to you’,” Buszard said. “Now that you are graduating, this phrase takes on new meaning. The future, in fact, is up to you.”

Buszard pointed to the social and environmental challenges that exist in the Okanagan and around the world, reminding the graduating class that their university education and experiences have equipped them to improve their communities and contribute to the world in meaningful ways.

“Our graduates are the impact we have on the world. You make real our ambitions. It is over to you now,” Buszard said. “You have the capacity for bold and great contributions to the world. It is up to you, and we are very proud to have been a part of your preparation for that challenge.”

A total of 1,485 students were conferred UBC degrees – a record number – during Convocation, including 20 doctoral degrees and 87 master’s degrees. 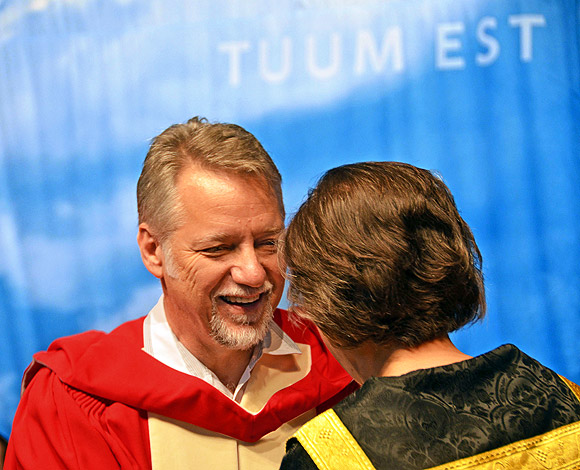 Renowned Canadian photographer Edward Burtynsky is all smiles after being conferred an honorary doctoral degree by UBC Chancellor Sarah Morgan-Silvester. 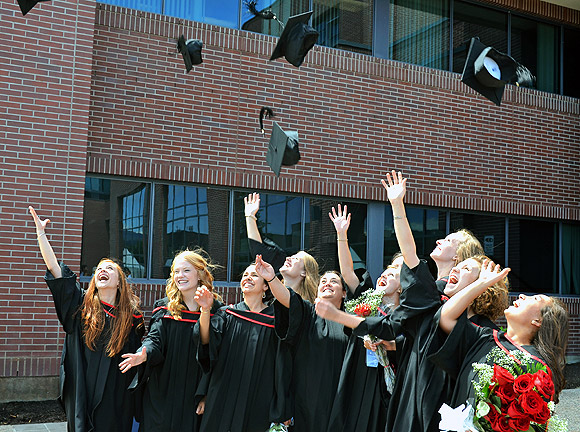