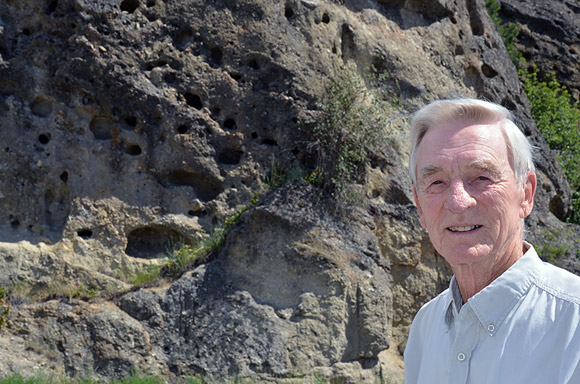 Murray Roed stands beside a sandstone and conglomerate outcropping estimated to be about 50 million years old. Geologists have determined that White Lake flowed through the Okanagan valley at this time, winding between towering volcanoes, leaving behind rocky deposits like this one on Boucherie Road in West Kelowna.

When you’re a natural-born teacher and have a certain zeal for something, you can spend most of your waking hours sharing that passion.

Such is the case for geologist Murray Roed, who taught a fourth-year geology class in the Irving K. Barber School of Arts and Sciences at UBC’s Okanagan campus. Roed, 75, has been honoured with the 2013 E.R. Ward Neale medal, an annual award presented by the Geological Association of Canada for an individual’s sustained outstanding efforts in sharing earth science with the public.

Roed is passionate about the Earth and uses every opportunity to share his enthusiasm. It may be as simple as pointing out and explaining a 50-million-year-old Okanagan rock formation to a stranger, or more extensive work such as writing a book series, painting landscapes, or taking school children on organized geoscience excursions.

“I love teaching people about geology, and one of the great things about geology is that it reaches all ages,” Roed says. “I’ve taken kids as young as Grade 2 on field trips to look at geological deposits.”

He was a geological and engineering consultant for more than 35 years, and has now retired from consulting to free up more time to write, paint, and teach. He loves engaging with students and will talk for hours about Okanagan geology – how it formed, why the rocks are here, the origin of the huge lakes that once covered the valley, and the many stories hidden beneath Earth’s surface.

It’s this passion that prompted earth and environmental sciences Prof. John Greenough to nominate Roed for the Neale medal. The award is presented to an exemplar of geoscience communication, either through teaching, public lectures, print or electronic media, and school visits. Roed, whose books have sold more than 15,000 copies, has done all of the above. And he’s thrilled, though shocked, to win the award.

“I was stunned — it was wonderful to be nominated, but it was a total surprise to hear that I had won,” Roed says. “I just have fun doing what I’m doing, especially with the young students. It’s great to bring the stories alive. I don’t think people realize the rich geological history of this valley.”

Roed’s five books, with contributions from several colleagues, have also become valuable resources at UBC. Greenough notes that they highlight topical and important issues such as hydrology and watershed management, and the protection of groundwater resources. And, he adds, the fact that Roed’s books are research tools for graduate students, and can be found in elementary classrooms as well as living rooms, speaks to the quality of the text.

“The books are also impressive because of the immense range of geoscience topics covered, including geoarchaeology, gemology, bedrock geology, surficial geology, climate change, and geo-technical aspects of the R.B. Bennett bridge construction over Okanagan Lake.

“It goes beyond a fun-to-read style and catchy subject headings,” continues Greenough. “As a testament to their readability and his infectious enthusiastic writing, thousands of his books have been sold.”

Most of the illustrations, paintings, and photography in the books were created by Roed. And Greenough notes, while Roed’s artwork adds to the texture of the books, he’s also donated some of his landscape paintings for fundraisers to benefit UBC students.

“An accomplished artist, Murray’s work has put geoscience on the walls of homes, garnered repeated media attention, and helped the UBC Okanagan Geoscience Club raise money,” says Greenough. “Most notably, proceeds from book sales have led to scholarships that encourage students to enroll in geoscience programs.”

In fact, the Okanagan Geology Committee Scholarship Endowment is approaching $100,000. Greenough points out that neither the scholarships nor the endowment bear Roed’s name.

“Murray has done all of this selflessly, for free. As a self-employed consulting geologist, he was not on a government or university payroll with a mandate for communication, and the years of effort have undoubtedly cost him personally,” says Greenough.

“The community recognizes his immense, selfless contributions. But why do it? His ground-breaking accomplishments attest to Murray’s passion and devotion to geoscience, which comes straight from his heart.” 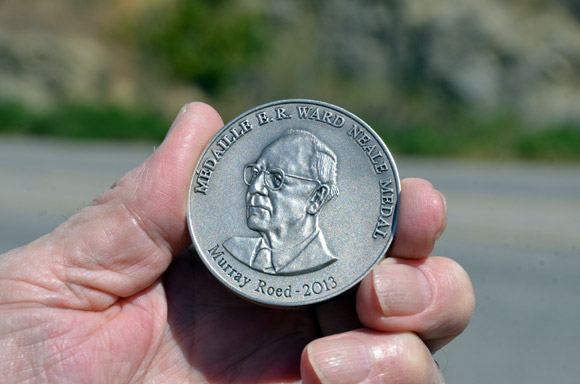 Murray Roed holds the E.R. Ward Neale medal presented to him for outstanding leadership in communicating and explaining geoscience.