UBC nursing student impacts the gritty side of outreach nursing 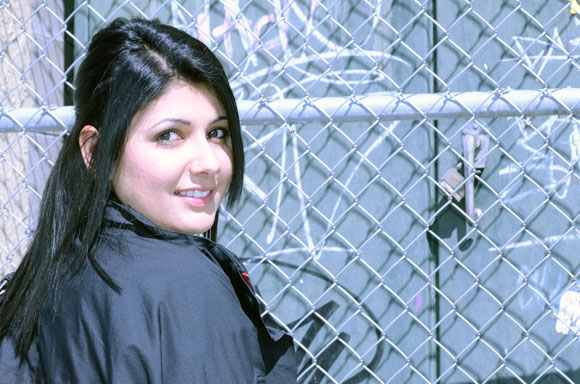 While they don’t happen often, drug overdoses are a reality in Kelowna. And for staff at the downtown Outreach Urban Health Centre, they know each death is preventable. So when the BC Centre for Disease Control (BCCDC) introduced a pilot project called Take Home Naloxone, they knew the potential to save lives was one step closer.

Naloxone is a prescription drug that can reverse heroin, morphine, and other opioid-based overdoses. When an addict overdoses, they go into respiratory distress and an injection of naloxone, if administered quickly, can get that person breathing again.

Under the direction of an outreach clinic, at-risk participants in the pilot program would be given a kit they would carry with them. Inside each kit are two ampoules of naloxone, two hypodermic needles, and basic instructions. It is similar to an EpiPen, but easier to use and has no harmful side effects.

Avneet Khela, who just graduated from the Bachelor of Science in Nursing program at UBC’s Okanagan campus, played a crucial role in preparing for the implementation of this program at Kelowna’s Outreach Urban Health Centre. This spring Khela completed a six-week practice placement at the centre and did much of the necessary groundwork for the program.

Part of her work involved a survey of outreach clinic clients, and Khela asked clients questions about drug use and whether they had ever witnessed an overdose. Most had.

After completing her survey, she engaged stakeholder groups, organized information sessions about the program, and got the local RCMP and fire department on board. She completed the groundwork and left a clear paper trail to ensure the pilot program can launch smoothly.

Khela quickly became immersed in the job, showing up before dawn, going out on the streets with outreach workers, meeting the clients, and ensuring they got the help they needed that day. The more people she met, the more convinced she became that naloxone had to be in the hands of people who use opioids.

“From the very first day on the job, this has been such a big learning curve for me, and I’ve learned so much about myself and the need for outreach in this community,” she says.

Kelowna ranks fifth in BC for deaths from illicit drugs, with 46 deaths in the past five years.  Until the province launched the initiative in 2012, only BC Ambulance Service and medical personnel could administer the medication. In 2011, BC Ambulance used naloxone 2,367 times.

“Drug addicts and those who live on the streets deserve the right to proper health care, as do all BC residents,” says Khela.

“It’s important for people to not be judgmental,” she says. “People need to realize that everyone has an equal right to health care, everyone deserves the right to be cared for and to feel that somebody cares about them.”

UBC Nursing Instructor Natalie Murdoch says the development of the clinic’s Take Home Naloxone pilot program is a great example of the benefits of the UBC and Interior Health partnership, along with the help of the BCCDC.

“The curriculum for our program focuses on equity and social justice as part of understanding a particular population’s life experience with health and healing,” Murdoch explains. “Avneet’s placement is the perfect example of that, and that’s why we are so grateful to our community partners. They are seen by us at the School of Nursing as an integral aspect of the education that nursing students receive at UBC Okanagan.”

For more information about the BC Take Home Naloxone pilot project, visit www.towardtheheart.com.