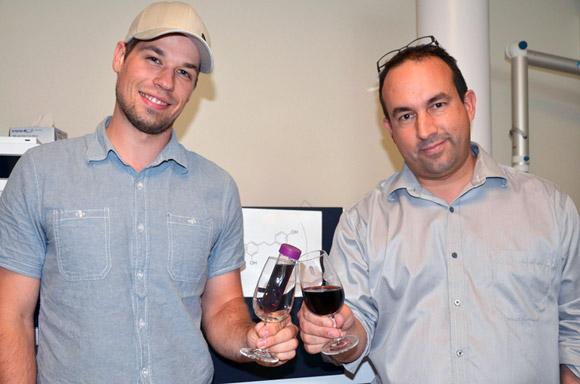 Scientists have long espoused the health benefits of red wine. Now UBC chemists have discovered 23 new molecules that could mean there are even more vino virtues.

Assoc. Prof. Cédric Saucier, who runs the Enology laboratory at UBC’s Okanagan campus, has spent years trying to determine what is really going on in that glass of red wine. The latest discovery – in partnership with researchers from Australia’s University of Adelaide and UBC graduate student Ryan Moss – stems from a “fishing” expedition to provide a more complete profile of the molecules already known to be in red wine.

While the team of scientists knew they would find molecules called stilbenoids, the kind which are believed to have health benefits, what they found surprised them – 41 stilbenoid compounds, 23 of which have never before been detected in red wine.

“The first thing we did was concentrate the wine extract,” says Moss, who is completing his master’s degree in chemistry. “We actually separated the compounds so we could examine each molecule individually and create a fingerprint of each molecule.”

Moss decided to reduce red wine extracts significantly. Then using mass spectrometry – where the molecules are separated into fragments and the corresponding ions are examined – he established that there were more “healthy” molecules in the wine than originally thought.

Saucier says the discovery could lead to medical breakthroughs and perhaps more conclusive benefits of drinking wine in moderation. These 23 newly discovered molecules are related to resveratrol, a natural wine chemical found in the skin of red grapes known to have potential effects of preventing aging-related human diseases.

“These new molecules are likely to have very interesting biological properties and may contribute to the benefits from drinking red wine,” says Saucier. “Who knows where this could lead? Perhaps new drugs and medicine for the future?”

Saucier says each of the new stilbenoids must now be analyzed and assessed. This is only the beginning and the new molecules will lead to many more years of research, he adds.

Their research was recently published in Rapid Communications in Mass Spectrometry: http://onlinelibrary.wiley.com/doi/10.1002/rcm.6636/abstract