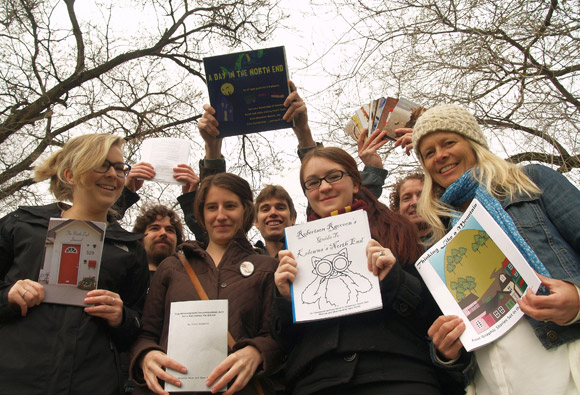 UBC Creative Writing students Michelle Grahame, Logan Saunders, Natalie Rice, Daniel Vineberg, Amy Stetzl, Kelly Shepherd and Karen Meyer display some of their creations based on Kelowna’s North End neighbourhood for their Dig Your Neighbourhood project, a package of art and activities that will introduce residents to the cultural and environmental past, present, and future of their neighbourhood.

We have developed several new courses that introduce students to critical scholarship while providing them with innovative, hands-on experiential learning opportunities. Our courses in Digital Humanities will provide students with experience in computer applications for cultural, visual art, historical, language and literary research. They include:

We have also developed fourth-year Creative Writing courses that focus on Publishing and Editing; Writing for Media; and Writing and Community Learning. As part of the Writing and Community Learning course, we are partnering with the Uptown Rutland Business Association and the Welcome Wagon to create a Dig Your Neighbourhood package of art for the Rutland neighbourhood.

The Department of Creative Studies will welcome the following authors to our campus and to our city this academic year:

David Chariandy – Canadian writer and one of the co-founders of Commodore Books. His debut novel Soucouyant was nominated for 10 literary prizes and awards;

Stephen Collis – a Canadian poet, Collis is the author of five books of poetry, including the Dorothy Livesay Poetry Prize winning On the Material (Talonbooks 2010);

Sheila Heti – a Canadian writer and editor who has authored five books, Heti will also be a Writer-in-Residence;

Chantal Neveu – a Canadian writer, author of three books and an interdisciplinary artist;

Mariko Tamaki – a Canadian artist and writer who has produced several works of both traditional written fiction and non-fiction.

The Faculty will host the following scholars during the year:

Tomie Hahn and Curtis Bahn from the Center for Cognition, Communication, and Culture at the Rensselaer Polytechnic Institute in Troy, New York (Wednesday, September 11, 2013,  2 to 4:30 p.m., Room 142, Creative and Critical Studies building);

Don McKay, one of Canada’s most important and influential ecopoets and ecocritics (late fall 2013 or early winter 2014);

Ashok Mathur has been appointed associate professor with tenure and Head of the Department of Creative Studies, from January 1, 2014 to June 30, 2018. He will be joining us as a faculty member on December 1, 2013. Mathur holds a PhD in English from the University of Calgary and comes to UBC from his current position as a Canada Research Chair in Cultural and Artistic Inquiry, and Director of the Centre for innovation in Culture and the Arts in Canada (CiCAC), at Thompson Rivers University (TRU). He was also an associate professor in TRU’s departments of Visual & Performing Arts; English and Modern Languages; and Journalism, Communication & New Media.

Prior to this, he was Head of Critical and Cultural Studies at the Emily Carr Institute of Art + Design in Vancouver from 2001-05. His scholarship focuses on anti-racism inside and outside the academy. He is the author of a volume of poetry, Loveruage (1993),  and three novels – Once Upon an Elephant  (1998), The Short, Happy Life of Harry Kumar (2001), A Little Distillery in Nowgong (2009). In 2011, he was lead editor for Cultivating Canada: reconciliation through the lens of cultural diversity, published by the Aboriginal Healing Foundation. Mathur’s artwork, “one hundred thirty-three thousand five hundred twenty-eight words and a super-8 grab,” was part of a 2009 acquisition by the Canada Council Art Bank.

Martin Blum assumed the position of Associate Head in the Department of Critical Studies for a two-year term, starting July 1, 2013. Blum is an associate professor in the English and Germanic Studies programs and has been a member of the department since 2005.

Greg Garrard joins the Department of Critical Studies as tenured associate professor of English and Sustainability Professor in FCCS. He holds a PhD in English from the University of Liverpool (1999). He is an internationally recognized leader in the development of Ecocriticism and joins us from his previous position as reader in Literature and the Environment and director of the Writing and Environment Research Centre at Bath Spa University, UK. Garrard brings extraordinary passion, experience and expertise that will bolster our faculty’s strength in Eco-Art and Ecocriticism and enhance the contribution of the humanities to the practice and scholarship of sustainability at UBC and beyond.

Samuel Roy-Bois has been appointed assistant professor in the Visual Arts program in the Department of Creative Studies, with expertise in 3D Sculpture and New Media.  He holds an MFA in Studio Arts from Concordia University. He has taught as a sessional instructor at Emily Carr University of Art + Design since 2008.  He is an award-wining artist with a distinguished solo exhibition record at prominent international galleries. With Roy-Bois’ arrival, the Visual Arts program and our students will benefit from an expanded curriculum that deepens their understanding of the relationship between sculpture and new media technologies.


More content from: Faculty of Creative and Critical Studies