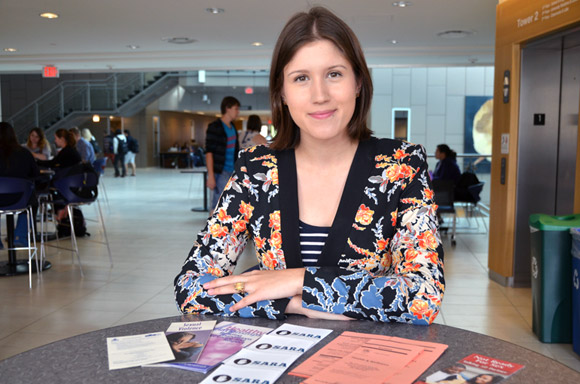 Lauren Gaudet is one of several volunteers who will be handing out information pamphlets during Sexual Assault and Rape Awareness week at UBC’s Okanagan campus September 30 to October 4.

Inappropriate frosh chants. Cyber-luring and child pornography allegations on trial in Vernon. Tearful recollections of abuse at the Truth and Reconciliation Commission event in Vancouver.

Even before the backdrop of current events, Lauren Gaudet knew that sexual assault and abuse is an issue at many universities. And she says, September is usually the month with the highest incidences reported.

Each September Gaudet is among several students, along with faculty and staff, who organize the Sexual Assault and Rape Awareness (SARA) week at UBC’s Okanagan campus. Volunteers set up tables around campus, and hand out pamphlets and information to educate students, staff, and faculty about a subject often only spoken about in hushed tones. The point of SARA, says Gaudet, is to talk openly about sexual consent, how to be a positive voice against rape culture, and to let people know that support is available for those affected by sexual assault and rape.

“The campaign is called ‘Be That Person,’” says Gaudet. “And we support people who stand up against rape culture, who help their friends get home safely, who inform others that chanting pro-rape lyrics is wrong.”

According to the Canadian organization Act to End Violence Against Women, more than 80 per cent of rapes on university and college campuses are committed by someone the victim knows and many happen in the first eight weeks of classes.

This year the SARA event has partnered with many campus departments such as Health and Wellness, Heat athletic teams, Campus Life, Get Involved, the Aboriginal Student Centre, the Pride Centre, RezLife, and UBCO.TV.

“It has been a great pleasure to work with so many individuals campus-wide to target this serious issue.  Our collective efforts are really speaking to our campus culture where we support ‘being that person’ who stands up against rape culture and is well informed,” says Gaudet.

Along with the health and wellness information and handouts, SARA also has an interactive community board where people can post anonymous comments. Gaudet says postings have included positive feedback such as: stay strong, you are not alone, people care, and be brave.

“What I love about this interactive board is that it gives people the opportunity to see real comments from individuals on our campus. Often it is very difficult to talk about sexual consent. The board acts as a medium for people to still be involved in the ‘be that person’ conversation who may be uncomfortable having direct conversations.”

Gaudet, now in her first year of the Master of Social Work program, graduated last spring with a bachelor of arts degree with a major in Psychology and minor in Cultural Studies. SARA started two years ago as a student leadership legacy project when Gaudet and fellow student Kylie Dillon led a group of first-year students in the endeavour.

“We chose SARA because it is an important issue and has affected many individuals including myself,” she says. “There is a lot of confusion surrounding what sexual consent is and our goal is to educate our campus community and create a positive voice against rape culture.”

SARA events take place at the Charles E. Fipke Centre for Innovative Research, 3247 University Way, and the Richard S. Hallisey Atrium in the Engineering, Management, and Education Building, 1137 Alumni Way, on UBC’s Okanagan campus the week of Sept. 30 to Oct. 4. Campus counsellors are also available to consult with during the week.