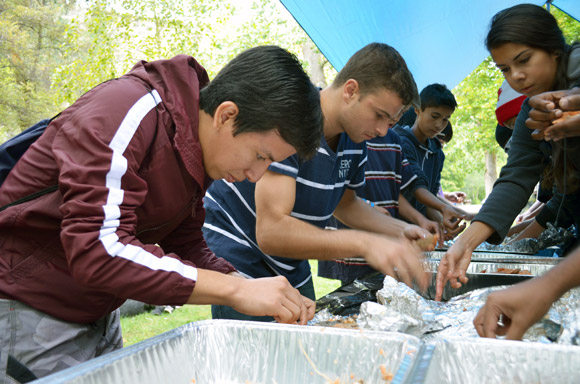 Supports to Aboriginal students came from both rural and urban-based events in September.

Students living on-campus were invited to ‘Explore Kelowna’ event which toured various attractions like the Kelowna Farmer’s Market and Taste of Kelowna in the downtown core. Later in the month, students took part in the annual Okanagan Nation Salmon Feast in Okanagan Falls Provincial Park.

“While we have held the trip to the South Okanagan for four years, this year we were looking for ways to engage students in housing and help with their transition into the Valley,” said Aboriginal Programs & Services Director Adrienne Vedan. “I believe both events help create the sense of belonging for our students and also give some context to this special place.”

Transfer student Elora Bascello took part in both events. “The Salmon Feast was great. Not only was the food delicious, but the ceremony and cultural experience was really fantastic. Experiencing another nation’s customs was something out of the ordinary and very educational. I had a great time overall and can’t wait to attend next year,” said Bascello who spent last year at the University of Buffalo.

“And Explore Kelowna was a way for me to connect with the city of Kelowna and experience other places in the city I otherwise wouldn’t have experienced. Going to the farmer’s market has been apart of my weekend routine since the trip.  I feel more comfortable navigating through the city on my own since the trip,” she added.

Both off-campus trips started at the UBC bus loop. For Explore Kelowna, students took transit down to the Kelowna Farmer’s Market before stopping by Orchard Park Mall. After arriving downtown, students look advantage of the Taste of Kelowna event where local eateries promoted their establishments with small free portions. The trip ended with a stop at an Italian restaurant for late lunch.

“I ended up bumping into a couple UBC professors in a store and they were gracious enough to come by and visit with the students at the restaurant,” said Aboriginal Programs & Services Administrator Dan Odenbach. “It was an unexpected treat to have them come by.”

For Kishay McKigney, getting a guided tour of downtown helped with her transition into the Central Okanagan. “I didn’t have any expectations for the day. At the end of the event, I felt it was a lovely time spent getting to know people and Kelowna,” said McKigney who relocated from Merritt.

A chartered bus, made up of Aboriginal and International students travelled to the Okanagan Nation Salmon Feast in Okanagan Falls. Once on site, students took part in the opening ceremonies, deboned salmon from the outdoor cooking area, took part in the feast and participated in ceremonies on the riverbank. One ceremony gave back collected fish bones from participant’s plates while another featured guest’s being blessed with tree bows and water from the river.

For international student Wesley Olaya from Ecuador, deboning the sockeye was a good way to get some hands-on experience.

“This is so much different from when you cook in your house. I like it because it’s like the community working together. Everybody gathers to do this.”

“Today was great. It was wonderful to take part in the Syilx tradition,” added student Alli Matchett, a Shuswap Nation member. 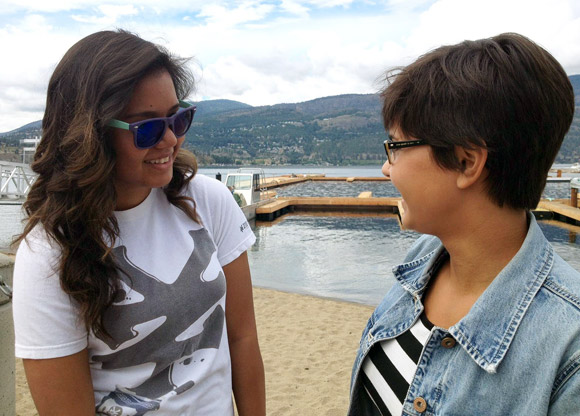 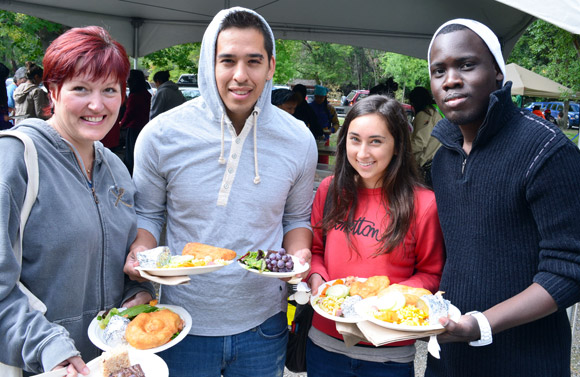