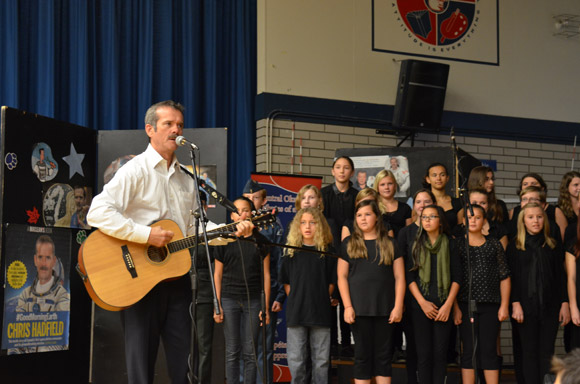 Col. Chris Hadfield plays the song, Is Somebody Singing, with students at École KLO Middle School.

How do you tune your guitar in space? Or sleep? Even breathe? 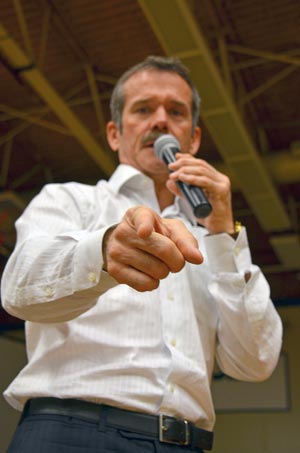 Col. Chris Hadfield makes a point during his talk to students at École KLO Middle School.

The questions came fast and furious for Chris Hadfield, “Canada’s spaceman,” during two appearances in the Okanagan Monday as part of UBC’s Distinguished Speaker Series. He was greeted like a rock star, first at École KLO Middle School, where more than 600 students thundered their approval. The adulation continued again later, when Hadfield delivered his story of life in space, electrifying 800 people packed into the Kelowna Community Theatre and sparking a standing ovation.

Hadfield, who commanded the International Space Station (ISS) for five months earlier this year, became a global sensation for his videos, tweets and music from space. Audiences estimated in the millions worldwide followed Hadfield’s exploits as he displayed breathtaking photos of Earth and demonstrated vignettes of life in space, such as what happens when you wring out a washcloth in a weightless environment.

Hadfield is a master story teller. From describing some of the 200-plus experiments performed aboard the ISS during his command, to tales about his personal life – ambitions to be an astronaut from age nine – Hadfield engaged his audience with a spell-binding narrative and video presentation.

Asked about his music from space, where Hadfield co-wrote and recorded the song Is Somebody Singing with Ed Robertson of the Bare Naked Ladies, the retired astronaut said he found music relaxing and therapeutic. It also added a dimension to space exploration that Hadfield treasured.

“To bring the arts into space was really something special,” Hadfield said. “We need to remind ourselves of our own humanity, whether it’s on earth or in space.”

His most fascinating time in space? Going on spacewalks Hadfield said, is an incomparable experience.

The astronaut told a heart-felt story about his wife Helene and three children and the struggle to make ends meet early in his space career, starting in the 1980s when he joined the Canadian space program. Hadfield, an engineer and accomplished test pilot, decided he would abandon his pursuit of space for the relative comfort and lucrative pay as a commercial airline pilot.

Helene told him to forgo any such notion. Not pursuing his lifelong dream, the regrets would make him miserable – and in turn make his family miserable, the astronaut’s wife said. So pursue the dream and we will find a way to get by, she advised him. Without his family’s support, Hadfield said he would never have accomplished everything he did.

Hadfield’s appearance in the Okanagan in the Distinguished Speaker Series was sponsored by an endowment from the late Irving K. Barber, after whom UBC’s Okanagan campus School of Arts and Sciences is named. 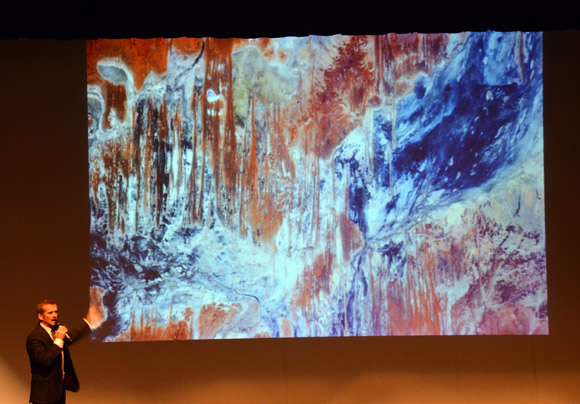 Col. Chris Hadfield describes the Australian outback as seen from outer space – and captured in his photo from the International Space Station, during his Distinguished Speaker Series talk.