Birds of a feather photograph local species together 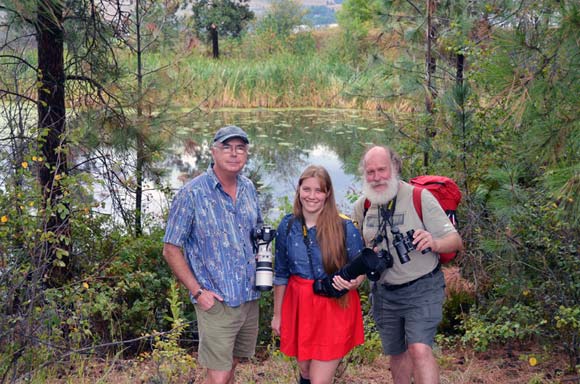 Assoc. Prof. Bob Lalonde (left) and Prof. Ian Walker with his daughter Emma took hundreds of photos of birds at the UBC pond. They turned those images into a 2014 calendar with hopes of raising funds for fourth-year undergraduate science students.

Two like-minded biologists at UBC’s Okanagan campus spent their spare time last summer working on a photographic fundraising idea to benefit their students. And now that their 2014 Birds of the UBC Okanagan Pond calendar is in stores, they hope it flies of the shelves.

Assoc. Prof. Bob Lalonde and Prof. Ian Walker of the Irving K. Barber School of Arts and Sciences are regular participants in the weekly Birds, Bugs, and Botany walks that take place on campus each spring. The avid photographers often bring their cameras and get caught up in the flora and fauna they encounter, especially near the pond located behind the Engineering, Management and Education building. Walker’s daughter Emma, a biology student at UBC, tagged along and added some of her own photos to the project.

Created in 1991 as a retention pool for storm water, the pond has been reclaimed by nature. It is now a popular breeding ground for many species – so many, in fact, the biologists accumulated enough photos for a calendar that features 48 species of birds.

“We’re raising funds for our fourth-year undergraduate students who are involved in research projects,” Lalonde says.

Along with lab supplies, the students also need to fund printing costs for their research papers and posters. While the department budgets for these expenses, the well often runs dry before the end of the academic year. The fundraising goals aren’t lofty – the calendar retails for about $20, and with 300 calendars printed they hope to raise “a couple of thousand dollars to top up the financial pot.”

The easy part was the birding and photography. More challenging was sorting through hundreds of pictures and deciding which ones to feature.

Along with regulars like the California quail, mallard ducks, and Canada Geese, they also photographed the ruddy duck, American coot, yellow-rumped warbler, Cooper’s hawk, black-capped chickadee, blue-winged teal, dark-eyed junco, ring-necked pheasant, and a great-horned owl and its owlet. There are more than 70 photographs in the calendar, including some flora and other pond inhabitants such as Western painted turtles.

The 2014 Birds of the UBC Okanagan Pond calendar retails for $19.95 and can be purchased at Mosaic Books on Bernard Avenue in Kelowna, the Allan Brooks Nature Centre in Vernon, or the UBC bookstore, located inside the Administration Building at 1138 Alumni Avenue. It will soon also be available for purchase online at the Biology website: http://biol.ok.ubc.ca/2014_Birds_Calendar.html 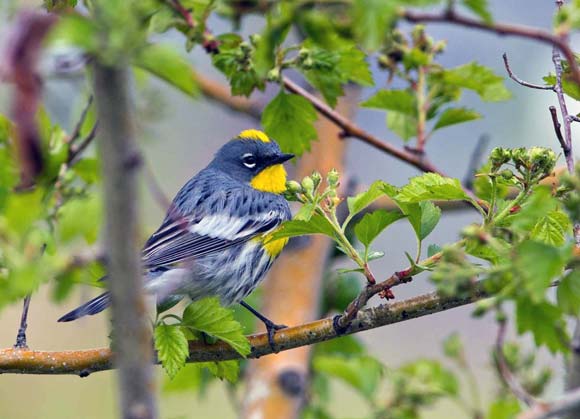 A yellow-rumped warbler is one of many birds showcased in the 2014 Birds of the UBC Okanagan Pond calendar created by biologists Bob Lalonde and Ian Walker. 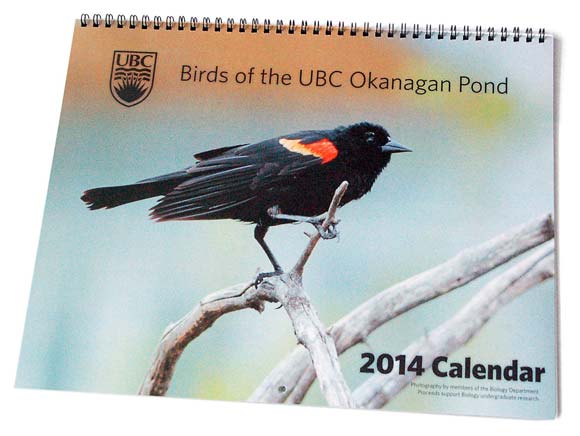 The 2014 Birds of the UBC Okanagan Pond calendar