Study focuses on holding breath for up to 10 minutes 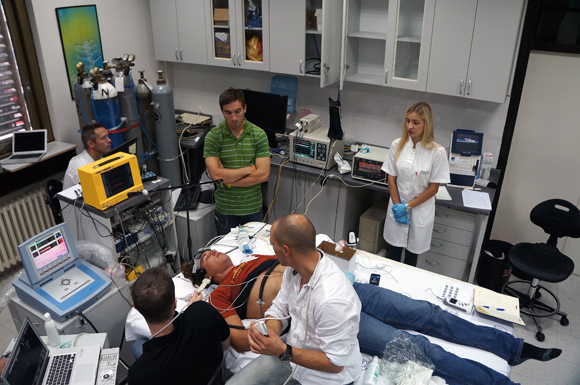 Free-diving, or breath-hold diving, is a sport with historical ties to spear fishers and pearl divers. Most countries, including Canada, have national teams that compete to see who can dive the deepest and hold their breath the longest. Croatia’s national team continues to break world records and now some of their top divers are helping a team of Canadian researchers from UBC’s Okanagan campus.

School of Health and Exercise Sciences PhD candidate Chris Willie was invited to Croatia to work with that country’s top scientific lab and conduct tests on some elite free-dive athletes. He is leading a team of UBC scientists that is in Croatia for most of the month.

Among those being tested is Croatia’s world-record holder Goran Colak, who recently held his breath for 22 minutes, 30 seconds after breathing in pure oxygen.

“There have been some preliminary studies done over the years on breath-hold divers, but very little research completed on their brains,” says Willie, who is earning his PhD in cerebral vascular physiology. “We aim to tease out the mechanisms involved that allow these people to hold their breath for such a long time.”

The second goal, he says, is to fundamentally understand how the brain responds to changes in blood gases, both oxygen and carbon dioxide.

The world record for free-divers not using oxygen, the type of testing that Willie is conducting, is about 12 minutes, done under dry land conditions in a lab.

“This kind of research is important to breath-hold divers, and to most people,” Willie says. “But it’s especially important for people who live with diseases such as chronic obstructive pulmonary disease and heart failure, who have changes in blood flow that affect the delivery of oxygen to the brain. These are things that affect their pathology, their quality of life, and their doctor’s ability to treat them.”

The experiments are being done in a dry lab with 20 of Croatia’s top breath-hold athletes, and assisted by their national team coach. While lying on a bed with a catheter in an arm, each athlete holds their breath until they reach levels of oxygen far lower than most people could survive, nearly as low as that of a human on the summit of Mt. Everest. During this time, sophisticated ultrasound equipment will be used to monitor the flow of blood into the brain.

Willie and his PhD supervisor Prof. Phil Ainslie, Canada Research Chair in Cerebrovascular Physiology, were part of an international scientific expedition at Everest’s base camp in 2012 where they examined the effects of heart and brain blood flow during oxygen deprivation at high altitudes.

Ainslie says the Croatian dry lab tests are a unique way to gain more information about the brain’s reaction when deprived of oxygen. And it’s possible only because these free divers can hold their breath long enough to elicit extreme oxygen deprivation.

“This is the first time this type of research has ever been attempted and it is very novel,” Ainslie says. “It will essentially change our understanding of how these people can hold their breath for so long.” 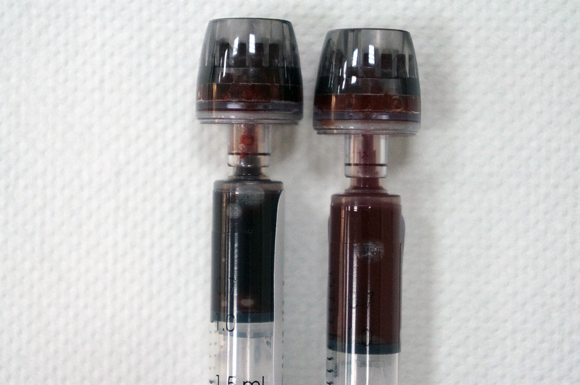 Vials contain samples (left) of blood at the end of a seven-minute breath-holding experiment. The colour is dark, due to oxygen depletion. Vial on right shows test subject’s oxygen-rich blood prior to the experiment. 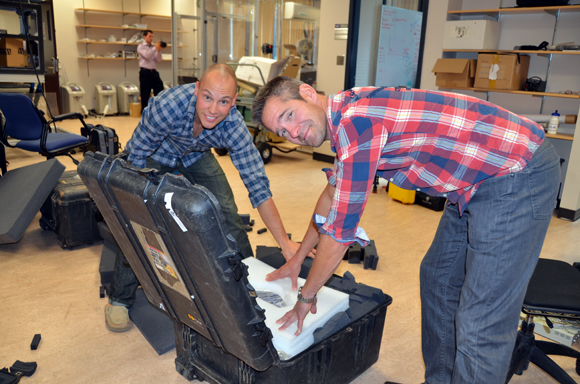 PhD student Chris Willie, left, and UBC Prof. Phil Ainslie pack up state-of-the-art ultrasound equipment, which will be used to monitor blood gases flowing to the brains of free-dive athletes during breath-hold experiments in Croatia.