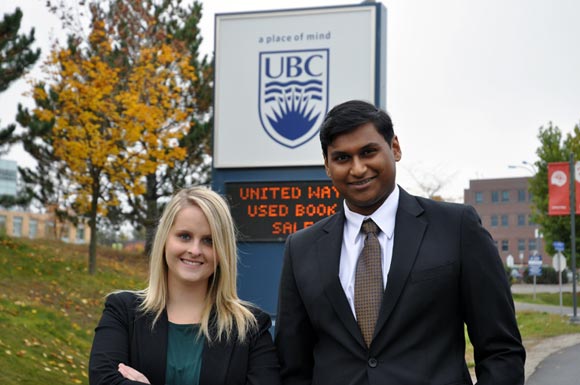 For the first time ever, two students from UBC’s Okanagan campus will participate in the International Model United Nations conference.

Sonya Mollema and Sutheeksan Sunthoram, both third-year Philosophy, Politics, and Economics students in the Irving K. Barber School of Arts and Sciences at UBC’s Okanagan campus, leave for England this week to participate in the exclusive global event. Sunthoram credits UBC’s international reputation for their invitation to Model UN Oxford where, as the only two UBC representatives, they will discuss world policy with 500 student delegates from the top international universities including Oxford, Cambridge, Yale, and Stanford.

“No student from UBC’s Okanagan campus has ever been invited to participate at this conference so we are thrilled to be going,” says Sunthoram. “And we are really excited to be representing Estonia. To get a European Union country is huge.”

The International Model United Nations (MUN) takes place each year and students represent United Nations member countries and debate current issues. As Estonian delegates, Sunthoram will be the Estonian voice on the European Council (EU) and Mollema will represent Estonia on the Human Rights Council.

While small in population and land mass, Estonia is a modern country with a growing high-tech industry — Skype was created by Estonian software developers. But there is also a history of communist occupation, a fight for independence, and human-rights concerns, especially for women.

“Estonia is one of the most wired countries in the world, most of its population is computer literate and their download speeds are huge,” says Sunthoram. “I will be discussing international technology advances, including the review of defense policies with regard to cyber warfare, and the establishment of the complete economic and monetary union to regulate and provide sound management of public finance.”

“The point of this whole exercise is to find out about other countries. I’ll be with other participants who are from universities around the world, and we will discuss international human rights violations including the right to privacy, human trafficking, and genital mutilation,” says Mollema. “It will be my job to add the Estonian point of view to these debates.”

The key to MUN is that participants aren’t “blinded by politics” as they represent countries other than their own, says Sunthoram.