For the most part boards are not the most glamorous material. But they made all the difference at the annual Rezletics Food Exchange Road Hockey Tournament.

After years of holding ball hockey events in campus parking lots, this marked the first year the annual tournament took place in the brand new Multi-Sport Court, located just east of the Purcell Residences. For tourney veterans, comparing the two venues is like driving a Hyundai Pony and then climbing behind the wheel of a late-model Lexus.

“This is way better,” said Misfits’ Colin Wales who used the boards to bank passes up to teammates. “The boards give you a lot more options in playing the game. It’s more like playing real hockey where you use the boards to your advantage.”

In years past, hockey balls easily skipped out of play, rolled under cars or got lost in parking lot shrubbery. Organizer Mike van Nostrand believes having the venue will go a long way in keeping the annual event alive.

“It’s been awesome. This rink keeps the games flowing a lot better. There’s lots of room out there and this keeps it more in a controlled space,” said van Nostrand who competed as part of the RezLife squad. “We didn’t have to create a space this year and that made everything so much smoother.

“I’d like to see this continue with another tournament in the spring,” he added.

The Multi-Sport Court is a welcome addition to those programming sporting events at the university.

“I’m really excited this space offers a new venue for more open and casual recreation opportunities to take place on campus,” said Campus Recreation Manager Layne McDougall. “In future, it’s likely we’ll see more organized events and maybe some recreational leagues in this space. But for now, we encourage students to get out and be active in their spare time.”

All participants were asked to sign waivers when registering. Goalie equipment was provided, but players had to provide their own sticks. In true team spirit, one squad went to Value Village and bought all the available white hockey jerseys. Many students took advantage of the barbecued burgers on site.

To participate in the RezLetics Food Exchange Road Hockey Tournament, players had to contribute a $5 food item to the UBC Food Exchange or the cash equivalent. UBC Aboriginal Programs & Services donated door prizes for survey participants and sports drinks. The surveys indicated students  appreciated the social and physical benefits of the tournament, but would like to have dividers separating the two ball hockey courts for future tournaments.

The Multi-Sport venue features two basketball courts and lighting which will automatically shut off at 9 p.m. 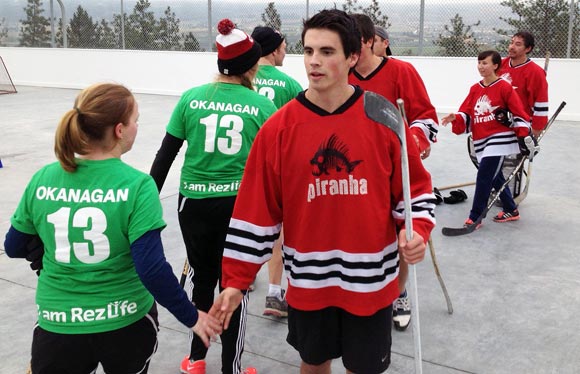 Aboriginal Programs & Services’ Clayton Schroeder congratulates the winning RezLife team after losing the final round robin matchup. All teams shook hands at the end of every game. 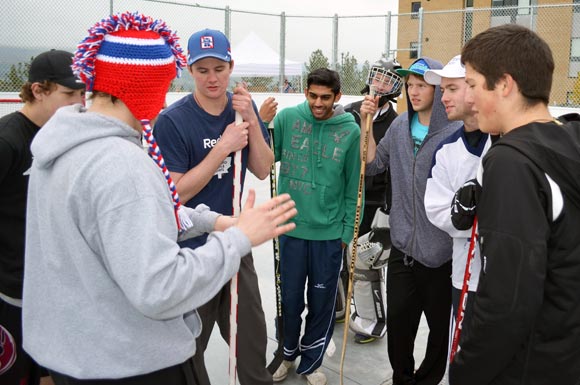