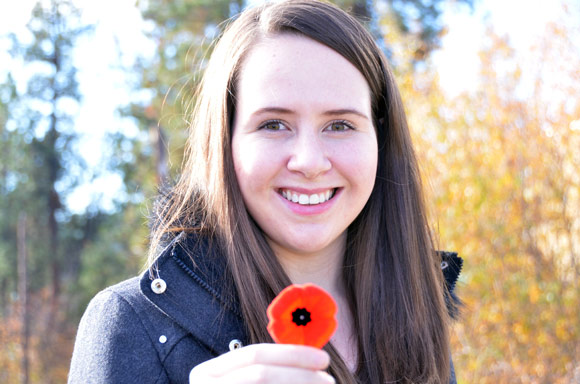 Sarah McIntosh is passionate about the importance of remembering all soldiers, regardless of uniform, who have fought for their country. During UBC’s Remembrance Day ceremony, she will speak about her experiences as a guide at the Vimy and Somme battlegrounds in France.

The fourth-year history student in the Irving K. Barber School of Arts and Sciences at UBC’s Okanagan campus will speak about these battlefields at UBC’s Remembrance Day ceremony that takes place Thursday, November 7.

McIntosh spent the past two winters working for Veterans Affairs Canada at the Canadian National War Memorial at Vimy Ridge and at Beaumont Hamel Newfoundland Memorial at the Somme Battlefield. Part of her job included interpreting historical information with visitors and tourists while she explored the trenches and tunnel systems that are original to the First World War.

“Being on the Canadian battlefields in France helped humanize the war effort for me,” McIntosh says.

“Working as a battlefield guide and having the opportunity to speak with a number of veterans, and descendants of veterans, made me understand why it’s so important to continue teaching the younger generation about the significance of Canadian military history and about the sacrifices made by our soldiers.”

UBC will mark Remembrance Day in the university’s courtyard starting at 10:45 a.m. on Thursday, November 7. A reception will follow in the Arts Building foyer starting at around 11:30 a.m. McIntosh  will be joined by fellow students, who will read poems, Royal Canadian Legion Branch 26’s colour party, local dignitaries, and UBC administration. The traditional two minutes of silence, along with a bugle reveille and bagpipe lament will be part of the formal service.

As it is the 60th anniversary of the Korean War armistice agreement, UBC has also partnered with the Okanagan Military Museum. An exhibit of photos and documents from that war will be on display in the university’s library from November 1 to 6. On November 7, the exhibit will move to the Arts Building foyer, with additional artifacts from the war.

McIntosh, 21, stresses that Canadians must remember to honour all soldiers, from all countries, from all wars — as the human cost of war is far too great to be ignored.

After the official ceremony, refreshments will be served inside the Arts Building Foyer. UBC’s Remembrance Service is a free event that is open to the public. Pay parking is in effect.