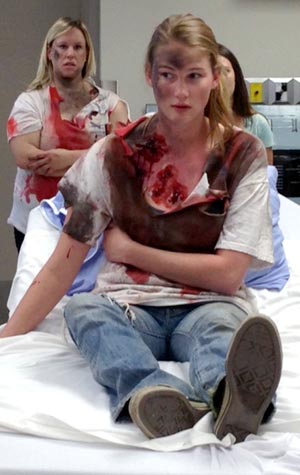 UBC nursing student Bobbi Bennett, as a ‘casualty’ in a recent mock disaster exercise in Vernon.

For Bobbi Bennett and eight of her fellow fourth-year UBC Okanagan School of Nursing students, the shoe was definitely on the other foot.

Instead of caring for patients, they were the patients – volunteers in a simulated large-scale emergency exercise held by first-responders at Vernon Jubilee Hospital recently. They were realistically made up to appear like victims in an explosion – Bennett had shrapnel and an embedded piece of silicon concrete poking out of her chest. Others had the appearance of gaping head wounds, lacerated faces, their wounds ranging from slight to life-threatening.

It was a great learning experience beyond the classroom and clinical training, Bennett says.

“A code-orange is an emergency designation of mass casualties, too many, that overwhelms a hospital’s ability to handle them all,” says Bennett. While the students had a fairly passive role, they observed first-hand how emergency responders – many of the doctors and nurses having military backgrounds – make life-and-death decisions in an instant.

The nine student “casualties” were quickly field-triaged and colour-coded into three groups: black, for those beyond help; red, for those with life-threatening injuries who would be priority care patients; and green, for those with less-serious injury.

“This is something very different from what nurses and doctors deal with. We would normally treat everybody – even some of the ‘black’ victims might live, but there just were not the resources to deal with them, so they would be made comfortable and that’s all,” says Bennett. 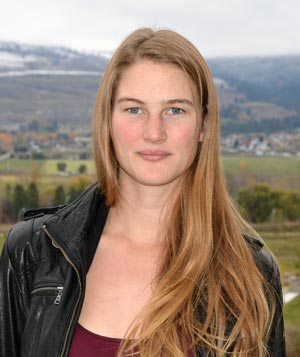 Those tagged red were cared for first – and the green patients, some of whom had serious injuries but would live, were treated later.

Among the nursing students, there was one ‘black’ victim, three greens and five reds. Bennett was a red.

“You feel much more vulnerable in that state. You are being cared for, rather than providing the care.”

The students also learned that on average, a health-care professional would deal with only one code-orange event in their entire career. Yet Bennett’s career after graduation might see her dealing with many such mass-casualty incidents. She plans to join the military. 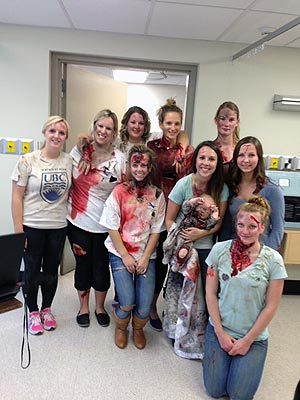 “I will be deployed and I expect to deal with a lot of situations that I might not otherwise be exposed to in a nursing career,” she says.