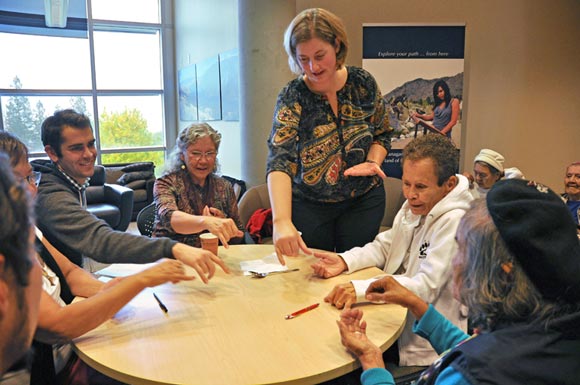 Linguistic anthropologist Christine Schreyer (standing) plays ‘Where are your Keys’ with Splatsin elders who recently spent a day at UBC’s Okanagan campus’ Aboriginal Centre where they shared their language with students and enjoyed a traditional meal. Pictured with Schreyer are student David Lacho, and elders Marie Thomas, Florence Nicholas, and Rosalind Williams.

In a fun learning exchange, elders from the Splatsin First Nation taught words from their language to UBC students, while the students shared a fun interactive learning game with the elders.

The Splatsin elders recently came to UBC’s Okanagan campus to play a verbal game with students in Christine Schreyer’s endangered languages course. The goal was to teach the elders a language game they could take home and share with the younger generation. In exchange, UBC students learned some Secwepemc (Shuswap) language.

Schreyer, an assistant professor of anthropology in the Irving K. Barber School of Arts and Sciences, introduced the visitors to the game Where are your keys? It mixes American Sign Language with the repetition of simple words. Players sit in a circle, point to an object, and say the object’s name in the language they are learning, and also sign it in American Sign Language. The game goes around in a circle, and participants verbally label items each time it is their turn. The Secwepemc-speaking elders taught words to UBC students, while the students taught the game to the elders.

“The game is simply based on repetition and body movement,” says Schreyer. “We’ve added the Indigenous language to the game and turned it into a fun way to share the language.”

By using basic objects, like a pen and a spoon, the words are reinforced by the repetition. It is hoped the elders, mostly grandmothers, will play it with their grandchildren and in their immersion daycare program and, by doing so, pass their language along to the next generation. And while it seems like fun and games, Schreyer says there is very real danger in Canada of losing many Indigenous languages.

“In 1999, it was estimated that there were about 23 fluent speakers left in the Splatsin community,” she says, adding that there are about 80 Indigenous languages in Canada, of which only three are thriving. Globally, the stats aren’t much better.

“There are 7,000 languages in the world and 90 per cent of them are endangered,” says Schreyer. “Languages of colonizers have taken over. It is usually the Indigenous and minority languages that are being lost.”

Schreyer, a linguistic anthropologist, has been teaching the endangered languages course since 2009 and is excited by the idea of language revitalization.

“It’s very important to try to preserve the language of Aboriginal peoples, as there is so much knowledge about the land and environment that lives within their language,” she says. “The province of BC has challenges because there are more Indigenous languages in BC than anywhere else in Canada. We wanted to teach the elders another method to share the languages and that’s where this game fits in perfectly.”

UBC Aboriginal Program Administrator Dan Odenbach, a Shuswap Nation member, says it is a great opportunity to get Elders onto campus and he is happy to host them in the Aboriginal Centre.

“We have a lot of people ask about using our space. The question we ask is how does this help Aboriginal students and promote culture?” Odenbach says. “We feel an event like this goes a long way in fulfilling this mandate. It was great to see respected elders working alongside students and everyone enjoying themselves. There was no shortage of laughter during this event.”