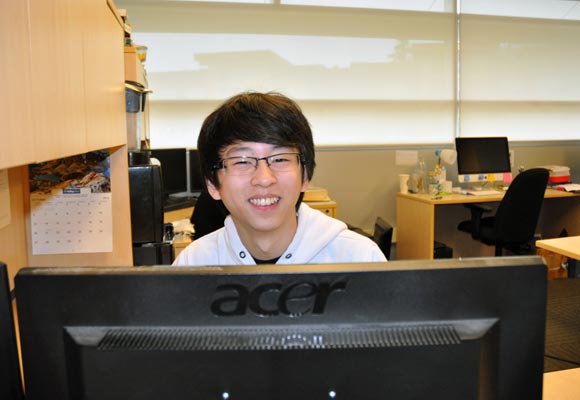 Eric Huang woke up one morning and was amazed to find more than 100 messages on his cell phone. The 18-year-old UBC Okanagan campus student turned into an overnight sensation on the social news site Reddit – and was featured on the homepage of the popular business and tech site Forbes.com

As he had many times before, Huang helped a high-school student solve a computer programming problem that the student had posted to Reddit, where he is known as Kristler.

“I was still half asleep when I checked my phone notifications,” says Huang. “I scrolled down on my phone and I kept scrolling and scrolling and it just didn’t end! I answer a lot of questions on Reddit, so this response was serendipitous.”

The comments, totaling nearly 550, were in response to how Huang had helped the student. Instead of just answering the question, Huang, as one Reddit user observed, helped “a high school student to think like a programmer instead of doing his homework for him.”

In the Reddit thread entitled, Changing the color of a bug based on direction, a high-school student asked how to create a program to solve a particular problem. Huang responded with, “Since this is a class assignment, I’m not going to answer it for you, and neither should anyone else.” He went on to ask probing questions that helped the student discover the answer for himself.

Praise from professional programmers, instructors and teachers for Huang’s clear, competent approach to teaching began filling up the Reddit thread. Many assumed Huang was a professional programmer or teacher and were shocked to learn he was an 18-year-old student. One commenter stated, “You did an excellent job of stepping back from the code and determining for each mistake the student was making, which specific programming concept was wrong or missing.”

Huang has some experience as a teacher. In Grade 9 he organized and taught the First Aid class for his secondary school. In high-school he also took an elective in Peer Tutoring and worked in his school’s learning support centre helping students with learning disabilities.

Taiwan-born Huang has lived in Vancouver since age five. He began studies in the Irving K. Barber School of Arts and Sciences at UBC’s Okanagan campus this September. Huang hasn’t settled on a major yet, but is interested in either computer science or mathematics. His professors are sure he will excel at whatever he chooses.

“Eric is an exceptional student,” says Associate Professor of Computer Science Ramon Lawrence. “He has demonstrated very strong problem-solving abilities and participates enthusiastically in class. He has a bright future in computer science.”

Huang may still be a teenager, but already looks ahead to eventually earning a PhD, and working in the field of mathematical cryptography.

“I’m fascinated by numbers that make bank accounts and passwords safe,” says Huang. “I like the blend of practical computer science, abstract algebra and higher-level math. The application is useful, but I am more interested in the theoretical side. Instead of working on the implementation, I would like to focus on the research and figure out the next step in this field.”