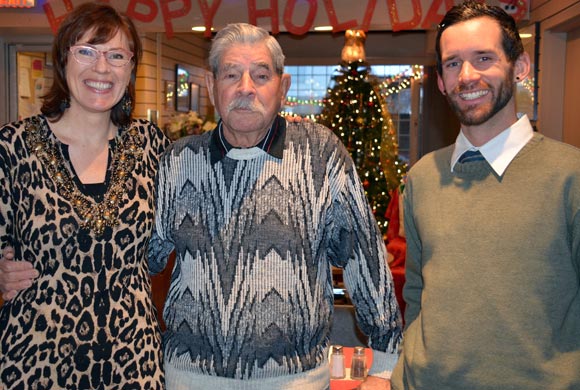 Local Korean War veterans told their stories about “the forgotten war” to UBC students in a community learning project that brought generations together.

“I have supervised many community service learning projects, but have to say this learning was among the most profound,” says Murphy, who holds a joint appointment with the School of Social Work in the Faculty of Health and Social Development and the Sociology program of the Irving K. Barber School of Arts and Sciences. Students were required to learn Canadian history, reflect on their feelings about war and hear a variety of sentiments from the public.

The students were also exposed to a host of stories, humourous and tragic, about the experiences of men who were probably their age when they fought for Canada.

“This type of learning cannot be forgotten,” says Murphy. The students wrote reflection papers of their accounts. In turn, UBC students returned the numerous messages collected through the weeks leading up to Remembrance Day in the form of memory books that are on display at the Legion.

Students and veterans both say they benefited from the experience.

George Barr, a veteran of the Second World War, Korean War and Vietnam War, was a tank commander the first time he saw Seoul reduced to rubble 62 years ago. He returned to Korea for 60th anniversary Remembrance ceremonies earlier this year and then became involved in the UBC project.

“It means an awful lot, reading those stories and seeing the pictures,” Barr says of the project. He was also impressed by the students’ approach.

“The biggest thing that stayed with me about this project was their tremendous attitude towards the veterans,” Barr says. “We were in the ‘forgotten war’ and the university is doing a fantastic job getting the word out to the public.”

Fourth-year graduating student Lisa Santos says she was amazed to learn so much about the Korean War from the veterans, since so little about it was taught her in grade school.

“It was one of the most brutal wars and we didn’t know much about it,” says Santos. “Our veterans did what they had to do out a sense of duty and love of country. They deserve to be commemorated and remembered.”

Third-year student Michael Archambault says the project changed his perspectives about war, veterans and what it means to support freedom.

“We are so removed from the concept of war,” says Archambault. “It’s unfathomable to imagine, except on this kind of academic endeavour.

“The project made me feel about this in a different way. There have been ‘just wars’ in our times and Korea was one of them. For me, my perspective has completely changed. We owe a debt of gratitude to our veterans and their families. So many of them lost sons and daughters and fathers.”