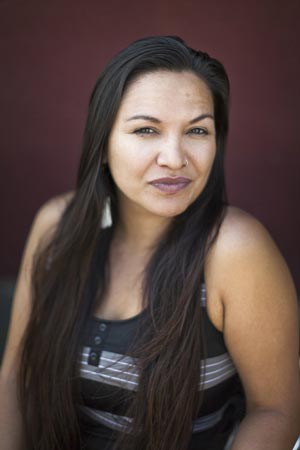 Award-winning director, director of photography and teacher Helen Haig-Brown (Tsilhoqot’in) brings her art to campus as a Visiting Scholar at UBC this month.

Haig-Brown will spend a week on UBC’s Okanagan campus from January 13 to 18 working with students and researchers in the Faculty of Creative and Critical Studies who are associated with the research theme of “Postcolonial Imaginaries.” She will engage with the university community around the critique of colonial, neocolonial, and imperial power relations, from historical, contemporary, and comparative perspectives.

Haig-Brown’s latest work, a continuing documentary project called the Legacy Series, focuses on the transformation and healing of intergenerational trauma to trust, worth, intimacy and love from colonial impacts such as residential school, smallpox and the Tsilhqot’in War.

Legacyinteractive.ca will launch this month and the TV component, My Legacy, will air on Aboriginal People Television Network in February 2014.  Legacy’s feature film will be released in 2015.  Haig-Brown is a graduate of Capilano University’s Indigenous Independent Digital Film Program and lives between her traditional territory in British Columbia’s Cariboo Chilcotin and her partner’s traditional home of Haida Gwaii.

Haig-Brown’s documentaries focus on experiences from within her own family and explore issues of land and language that are of significance to many First Nations people. Her first fictional work, The Cave, was an official selection of the 2011 Sundance Film Festival and of Berlinale 2010. In 2009, The Cave was named one of Canada’s Top Ten Short Films by the Toronto International Film Festival.

“By bringing outstanding visiting scholars and artists like Helen Haig-Brown to the campus, we give our students the chance to be introduced to exciting work being done in the field and give our faculty members the chance to collaborate on national and international projects,” says David Jefferess, associate professor of Cultural Studies and English. “The public component is an opportunity to invite the public to engage with important research being done on the campus.”

Media and Storytelling as Sites of Revitalization and Resurgence

This talk will explore the power of media to regenerate Indigenous knowledge, truths, and language through storytelling. Also, Haig-Brown will discuss the potential for healing colonial history and relations in Canada through sharing indigenous truth of experience and history, as well as creating an environment and space for voice and expression.

Helen Haig-Brown will share her continuing research that has become known as her Legacy Series, which includes works of film and Legacy Interactive, an “online community dedicated to honouring, healing, renewing, and transforming our Indigenous legacy.”