UBC engineers honoured for their ‘green’ way of thinking 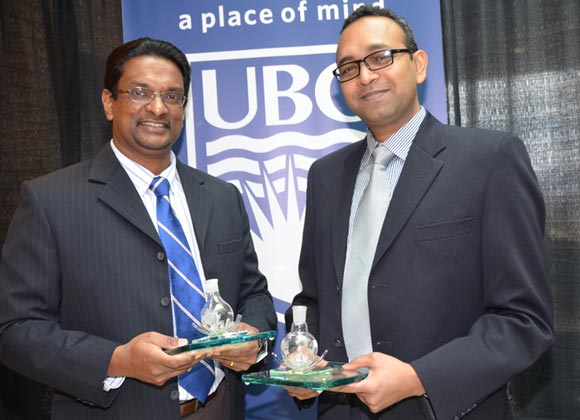 Kasun Hewage and Shahria Alam, researchers at UBC Okanagan’s School of Engineering, were presented with the Moldovan Award for their ‘green’ thinking initiatives.

Two researchers at UBC’s Okanagan campus are being recognized for their efforts to reduce the flow of materials destined for landfills.

Associate Professor Kasun Hewage and Assistant Professor Shahria Alam of the School of Engineering have been named recipients of the Moldovan Memorial Award to honour their dedication and efforts to bring green ideas to their classrooms and research projects.

Judit Moldovan, a long-time UBC employee who dedicated herself to make the university environmentally sustainable, passed away in September 2011. She was a founding member of the UBC Okanagan Green Research Advisory Committee overseeing sustainable practices on campus.

“This award is in memory of Judit’s accomplishments,” says Shelley Kayfish, director of Campus Operations and Risk Management. “She was a pioneer who introduced green labs to our campus and emphasized the use of environmentally-friendly reagents and solvents while trying to reduce the amounts of chemicals used in the undergraduate labs.”

“Aging infrastructure everywhere is being demolished and this generates a lot of waste,” says Alam. “The idea is to reutilize this, instead of considering it waste.”

Hewage, a key investigator with UBC’s Life Cycle Assessment lab, has launched a study with the City of Penticton to conduct energy reviews on city buildings, and is developing software that will help the city improve overall energy consumption. The project examines the everyday use and reuse of consumable items like pens, batteries, electronic appliances, and other items that may end up in a landfill.

“The life-cycle asset management tool will be used to monitor and adjust building controls on an ongoing basis to maximize the city’s energy efficiency,” says Hewage. “Our ultimate goal is that this program will be adapted for other municipalities and become a mainstream tool used to conserve energy.”

For their innovative work Hewage and Alam each win $1,000, which was presented by members of the Green Research Advisory Committee Thursday.

Moldovan played a key role in building the chemistry program and her responsibilities and contributions increased as the Okanagan campus grew to the point where she supervised 30 staff and organized more than 120 lab sections. She has also assisted in the development and delivery of the biochemistry labs, and helped design and commission the new chemical bunker and chemistry labs in the Science and Charles E. Fipke Centre for Innovative Research buildings.

While the Moldovan Memorial Award is a one-time honour, the Irving K. Barber School of Arts and Sciences’ chemistry department has established the Judit Moldovan Annual Teaching Assistant Award presented each year to chemistry teaching assistants who stand out in their efforts to help students succeed in their research.