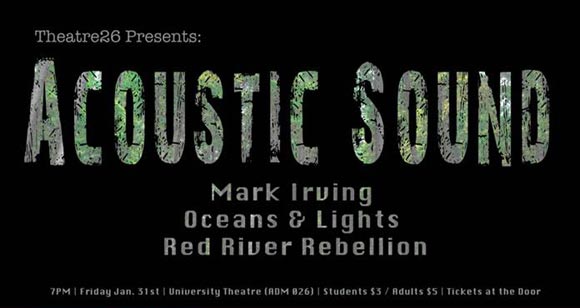 Join UBC’s Theatre26 for their first music night of the year featuring Mark Irving, Oceans & Lights, and Red River Rebellion. University Theatre (ADM026) Jan 31 at 7 p.m. Admission is $3 for students and $5 for adults. Tickets available at the door.

Mark Irving is a captivating singer/songwriter based in Kelowna, who has practiced his craft for more than 15 years. He began pursuing music seriously in 2005, after winning a city-wide songwriting competition hosted by Escape Artist Music. The win rewarded him with a recording package that allowed him to track his first demo, and Mark spent the next five years writing and touring western Canada. Mark also took home first place in a national talent search hosted by the Gospel Music Association Canada in 2010.

Irving’s debut EP, entitled “Memories of Tomorrow,” was released in spring 2011. He has become known for an honest vulnerability captured by raw vocals and lyrical finesse.

Oceans & Lights formed in 2009 as an optimistic group of musicians working to combine their talents into creating a new kind of sound in the Okanagan Valley. They have been steadily branching out of their hometown of Penticton with a focused alternative rock sound and an energetic live presence. Their dynamic music tends to be upbeat and high-energy, dotted with slow-burning, more progressive songs. To pick up a free copy of their 5-track EP, head to oceansandlights.com.

Red River Rebellion is a dynamic duo comprised of two poor university students who have a passion for folk and indie music. Despite drinking from mason jars and listening to Arcade Fire, they only consider themselves to be borderline hipsters, because being hipsters would be too mainstream. Their inspirations include The Civil Wars, Bon Iver, Coldplay, Of Monsters and Men, Mumford & Sons, and The Lonely Island. The duo is working towards their first EP, which they’re hoping to release later this year.