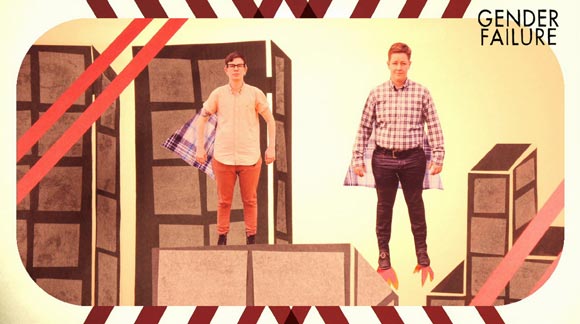 Even people who fit into the “gender binary” of society sometimes have trouble living up to the stereotypes.

If you are transgendered, there are struggles big and small living in a world that generally identifies with traditional gender roles, from navigating public washrooms to dealing with hostility from those who do not tolerate gender non-conformity. An example of trying to navigate that difference: Both artists prefer the pronoun ‘they’ to ‘he’ or ‘she’.

Coyote and Spoon relate their own experiences of “gender failure,” growing up and living in a society where being transgendered is often misunderstood, questioned and cloaked in ignorance.

“Rae and Ivan’s stories weren’t horrific accounts of violence or their own anger, but of inner struggles within everyday life in a world that only sees male and female roles,” blogger and writer Jennifer Irvine wrote in a review of Gender Failure performed in Vancouver. “They were able to speak about the violence they had sometimes endured in a way that still offered their audience humour, relief, and the possibility of survival and maybe even celebration.”

Spoon is also the subject of the National Film Board musical documentary My Prairie Home, with their 2013 album of the same name serving as the score and soundtrack to the film. Directed by Chelsea McMullan, this documentary about growing up and surviving in an evangelical Christian family premiered at the Vancouver International Film Festival and was released theatrically in Canada. The film is an official selection for Sundance 2014 and is nominated for a Canadian Screen Award for Best Feature Documentary.

An award-winning author of six collections of short stories, one novel, three CDs, four short films and a renowned performer, Coyote’s first love is live storytelling. Over the last 13 years  Coyote has become an audience favourite at music, poetry, spoken word and writer’s festivals from Anchorage to Amsterdam.

Coyote began performing in 1992, and in 1996 co-founded Taste This, a four-person performance troupe that combined live music, storytelling and performance poetry to create a text-driven genre-busting collaborative exchange.

Gender Failure is presented by Theatre 26,  UBC’s Faculty of Creative and Critical Studies, the UBC Pride Resource Centre and The Jane Rule Endowment for the Study of Human Relationships.