Partnership will allow exchange of students between the two countries 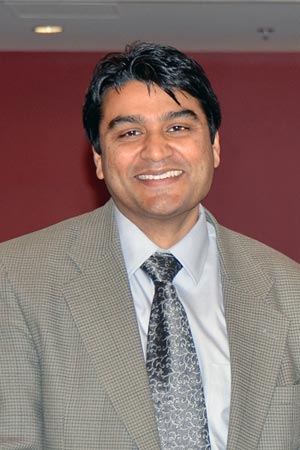 Rehan Sadiq, acting director of UBC’s School of Engineering, and a team of researchers have been awarded a $450,000 grant from Saudi Arabia’s National Science and Technology Plan to explore fresh water distribution.

While Saudi Arabia may be rich in oil, it lacks a resource most Canadians take for granted — a plentiful supply of clean and safe drinking water.

Engineering researchers at UBC’s Okanagan campus are continually looking at water distribution systems around the world and working to keep the water clean and flowing. That expertise is being applied in a new project in the Kingdom of Saudi Arabia, where water quality is a major issue.

Rehan Sadiq, professor and acting director of the School of Engineering at UBC’s Okanagan campus, is  currently working with researchers from King Fahd University of Petroleum and Minerals (KFUPM) with plans to evaluate potential water quality failures in distribution networks and to track potential human health risks.

“The study is very specific to their conditions in Saudi Arabia,” Sadiq says. “And when you recognize that about 90 per cent of their drinking water has to be desalinated that adds a lot more dimension to the research.”

Sadiq, along with KFUPM researchers Ashraf Farahat and Abdullah Al-Zahrani, and Prof. Manuel Rodriguez from Laval University, have been awarded a two-year $450,000 grant by Saudi Arabia’s National Science and Technology Plan. Farahat says the research collaboration between the two universities will help the oil-rich kingdom determine the potential for contamination in the potable water distribution systems.

“Water is a precious resource in Saudi Arabia,” Farahat says. “Strict regulations have been implemented by local authorities to maintain water quality. But distribution systems are complex and water can be contaminated through many pathways between the point of entry and the points of consumption.”

While the hands-on research will be conducted in Saudi Arabia, mostly by staff and faculty at KFUPM, Sadiq is bringing UBC’s water quality modeling expertise to the desert state, as the research funds allow for UBC students to travel to Saudi Arabia to assist with the study.

The principal objective is to develop a decision support tool (DST) that can determine the likelihood of a contamination in the water distribution network; and if that contaminant travels through the distribution system, what is the risk to those exposed to the water? The proposed DST will be based on state-of-the-art research conducted by Sadiq’s UBC research team.

There are different aspects of the research: determine if a water contaminant is microbial or chemical, find out how the water is becoming contaminated, and develop models to decide on solute/water mixing and that impact on the water contamination.

While KFUPM welcomes UBC’s water-related expertise, Sadiq says this collaboration between the two universities is a first and puts UBC on a new international playing field.

“At the end of the day we want to see how big the issue of contaminated water is for the people in Saudi Arabia and what is the magnitude of human health risk,” says Sadiq. “We are now tying our research ideas into their everyday issues of the need for clean and safe drinking water.