Sliding to the top: UBC engineers among the best at toboggan race 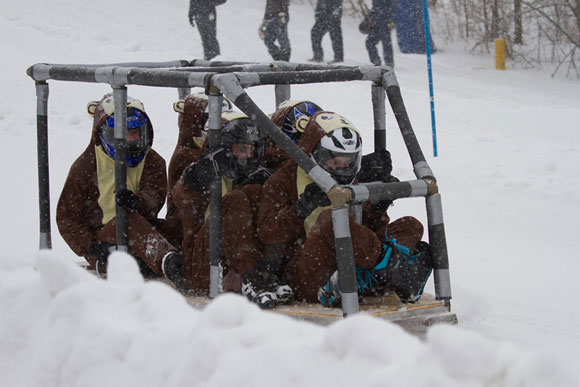 Quick quiz: what do engineers, concrete, and a slippery slope have in common?

If they are engineering students from UBC’s Okanagan campus, the answer has to be the annual Great Northern Concrete Toboggan Race (GNCTR). UBC’s team recently returned from Ontario where it picked up a number of awards including a second-place overall finish.

UBC’s Concrete Toboggan Club is a student-based organization with more than 40 engineering students involved. The goal is to design, construct, and race a toboggan with a sliding surface made of concrete. Along with a working braking system and room for five passengers, each sled must also have steering control, a roll cage, weigh less than 300 pounds, and be able to sustain an 80km/hr crash.

“Our team’s excellent result this year is due to the creativity, countless hours of work, and dedication of our students from civil and mechanical engineering,” Rteil says. “We believe these extra-curriculum activities allow our students to work in an interdisciplinary team and use the knowledge they have gained in the classroom to solve a challenging engineering problem.”

“What truly makes the Great Northern Concrete Toboggan Race special is that it motivates you to go beyond the specifics that you’ve learned in the classroom,” Hillis says. “It inspires you to seek an application to the theory, and it does so in a manner that encourages social cohesion, camaraderie, as well as a love for learning.”

While still basking in the glow of a successful race, Hillis says the team is now making plans for next year as UBC Okanagan will host the national event, bringing hundreds of competitors to Kelowna and Big White for the 2015 race.

Rteil says organizing the race is helping the students make connections in industry, as well giving them time to perfect their sliding skills.

“Being event organizers helps our students develop their soft skills by interacting with industry and engineering students from across Canada.”

The GNCTR is the oldest and largest engineering student competition in Canada and it attracts more than 400 students each year. The first race was held in 1974 in Red Deer, Alberta.